One of the sharpest black-and-white 35mm films in existence, the fine grain and low light sensitivity means that prints can typically be enlarged to over 2.5m diagonally without loss of resolution or detail! ISO 12 (up to 20 depending on development process) means you will need lots of light or a steady hand/tripod - but you will be well rewarded with a super-premium look

To understand more about the details above you can check out our film guide or if you want some inspiration then head over to our page on choosing your next film. And if you want the full details about the film, including technical information, read about Adox CMS over on EMULSIVE.

Adox is one of the oldest photographic brands in the world, established in Germany in 1860 by Dr. Carl Schleussner - who worked on early wet-collodion plates and X-ray plates. The company started marketing their own cameras in the early 20th Century, and introduced a line of B&W films in 1952 that became renowned for their sharpness of resolution. A difficult end to the last century saw the brand change hands multiple times - and now Adox films are produced by Fotoimpex across manufacturing plants in Germany and Switzerland. Their products remain very high quality with a focus on emulsions that resolve incredible levels of detail and contrast.

When you buy your camera film from us we can ship it across the UK, Europe, USA, New Zealand, Australia and Canada (more countries planned soon!) So buy your Adox CMS Film 35mm B&W ISO 12 today and dive back into the fun of 35mm film photography!

This film is about as totally opposite to an all-rounder as you can get... though it is something truly different for the adventurous among you. The name of the game here is contrast control, i'd advise shooting at ISO 12 unless you really want that contrast to dominate the image.

My sample shot was taken on an overcast day (low-contrast) at ISO 20 and developed in half-strength caffenol-CL for double the usual time (that you would use for full-strength) to try and control the contrast. The recommended developer may be better but is expensive and has a short shelf life, so I would only purchase that if you were planning to shoot this a lot in a short period, which for the type of film this is... I don't see anyone doing with any regularity outside of one project perhaps.

As I alluded to in the title, the results will haunt your dreams of past films shot with it's near total lack of visible grain and incredibly fine detail and acutance. 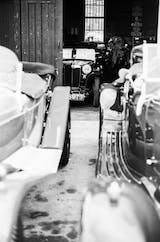 Very nice film with a great tonal range. Perfect for landscapes - making sure you're shooting in the right conditions!
I shot the film on a overcast day, in most shots the ground looks great but the sky is a bit over exposed. Great beginner film though, perfect for helping learn cameras settings and location conditions.

Ridiculously cheap for what it is but check how much development will cost you before committing, I was charged £20 and if you're developing it yourself you'll either want to get the correct developer or do a lot of research/testing.
I shot most of the roll hand-held at box speed on a sunny day, with some additional shots indoors to test reciprocity failure. To shoot hand-held I used my fastest lens (Minolta AF 50mm/1.4) and kept the aperture between f/2 and f/4 at all times.
The results are excellent when you get it right and grain is undetectable when scanned at 7200dpi on a plustek 8100, with clear detail down to pixel level. Yes, you could probably get better results with a medium format camera but for 35mm there's nothing that I can think of that comes close to the resolution you can achieve with this film. To provide as best an illustration I have included a crop off the sign on the post box in the photos below where it has resolved all of the lettering at a distance of roughly 3m 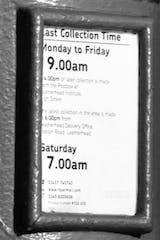 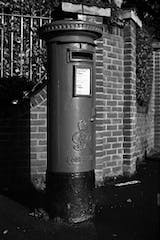 Brilliant film, has a really fine grain and the photos come out with great gloomy contrast. Will definitely be using it again although my local development lab had trouble scanning the film.

Such a unique and extraordinary looking film stock, with incredible detail, sharpness and dynamic range. With such a low iso film it makes you slow down the process even more, and really concentrate on the composition - also luckily the sun was out at this Glastonbury in 2019. Definitely one of my favourite b&w film stocks to shoot, and highly recommend trying one of the incredible ADOX films, especially if you get chance to at a sunny summer festival. :'( 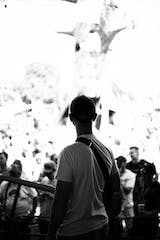 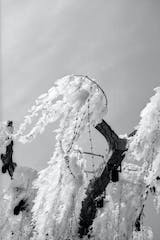 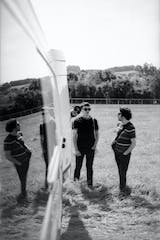