A true rarity - black & white slide film! This 35mm will need special processing, but will reward you with B&W positive images on a clear base. And this is no gimmick either, the emulsion is high quality and will give you very fine grain and resolving power for beautifully detailed photos.

To understand more about the details above you can check out our film guide or if you want some inspiration then head over to our page on choosing your next film. And if you want the full details about the film, including technical information, read about Foma Fomapan R over on EMULSIVE.

When you buy your camera film from us we can ship it across the UK, Europe, USA, New Zealand, Australia and Canada (more countries planned soon!) So buy your Foma Fomapan R Film 35mm B&W ISO 100 today and dive back into the fun of 35mm film photography!

This was my first time using a slide film and honestly I am shocked with how clear these shots came out. I took this film with me to a protest on a rainy day and still was able to get low-grain clear shots with good shading.

Fomapan R100 is often overlooked compared to the new Adox Scala film when looking for a suitable b&w slide film, but it shouldn't!

Designed specifically as a cine-reversal film by Foma Bohemia, this film contains a special anti-halation masking layer within the emulsion which prevents light-scattering and makes for super-sharp slides.
Contrast is moderate to high, and the crystal clear base makes projecting this film a joy.

As with all b&w slide films exposure is more critical than with normal b&w negative films, so double check your exposure meter.
This can be developed at home using Foma's special reversal kit.....or you can send it to SilverPan ;) 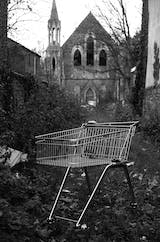 A
A.
Perfect for: Landscapes, Street Photography, Pinhole/Long-Exposure, Creative/Abstract
a rare treat

black and white slide film is a bit of a lost art form so its nice to see some still being sold, the only downside is that for a positive it requires a very specific developing process that not a lot of labs will do! thankfully there are labs that will do it so you will be able to get this developed just maybe at a higher cost than usual