Pick up some photographic inspiration 📚

Our friends at The Film Photography Project have crafted for you their FPP D96 black and white negative developer powder in handy packages that makes 3.8L of developer when mixed with water.

NB: as always you will also need FIXER to develop your film - not included

Long considered the go-to BW developer for the motion picture industry, D96 is a highly adaptable lower contrast film developer that enables you to increase the contrast by increasing your developing time or agitation.

This developer has a very long life, when you mix the gallon, you can store it on a one 4L jug OR store it in 4 1L bottles. If you store in 4 bottles, as you use it and the contrast begins to lower, start a second fresh bottle, and save the first one for extremely contrasty lighting or films. FPP recommend using it as a stock developer, use it without diluting and pour it back into your quart container for re-use.

When you buy your camera film from us we can ship it across the UK, Europe, USA, New Zealand, Australia and Canada (more countries planned soon!) So buy your FPP D96 Developing kit today and dive back into the fun of B&W film photography!

I've been using this developer with Eastman Double X motion picture film (rated at ISO 200) and the results have been excellent. My method has been different to the one suggested by the FPP and after 11 rolls I'm still getting consistent results. I've been re-using 1 litre as stock solution and replacing 70ml with fresh stock for every roll I've developed.
Previously I was using the liquid D96 from Bellini Photo but found that after 7 rolls through the 1 litre of stock solution the contrast and density of my negatives started to drop and it only came in a 1 lire kit so there was nothing to replenish with. 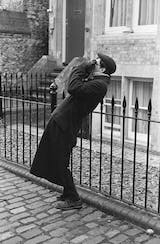