A fantastic-looking film takes inspiration from East European graphic art and the Space Race to bring some Soviet excitement to our cameras! This 35mm film ISO 100 is a long-established emulsion from a European film producer that will deliver black and white images with a beautiful grainy finish. Well-suited to sunny days and studio lighting, this B&W Kosmo Foto Mono is a very promising first outing from the brand.

To understand more about the details above you can check out our film guide or if you want some inspiration then head over to our page on choosing your next film. And if you want the full details about the film, including technical information, read about Kosmofoto Mono over on EMULSIVE.

Kosmo Foto began life as blog (previously called Zorki Photo) in 2012 and quickly gained a big and loyal following thanks to the original and interesting content. Fast forward a few years and they are taking a front seat in the resurgence of analogue photography, producing their first film (Mono) - a rebrand of a less-well-known emulsion - in 2017. Sales have been strong and we hope to see much more of this brand in the coming years!

When you buy your camera film from us we can ship it across the UK, Europe, USA, New Zealand, Australia and Canada (more countries planned soon!) So buy your Kosmo Foto Mono Film 35mm B&W ISO 100 today and dive back into the fun of 35mm film photography!

I've shot two rolls of KosmoFoto 35mm so far, both somewhat experimental. The first was with a mid-1960s Zeiss Flektogon 20mm f4 mounted on an Ihagee Exa (a camera with a waist-level finder and only four shutter-speeds!), and the second was on a medium-format Mamiya 645 Pro with 80mm f1.9 (the fastest medium-format lens ever made!), using adapters to expose the sprocket-holes of 35mm film. I developed both rolls together in D-76 1+1 for 9 minutes at 20°C. I got relatively understated contrast, which is not a bad thing because the tonal range was rich and subtle, but I mention it because at least one other reviewer reported high contrast (maybe down to differences in developing?) The subtle contrast together with a bit more grain than you might expect from 100 ISO produces a soft-edged, retro look which I thought complemented the Flektogon 20mm really well. But don't take my word for it, have a look at the sample images and judge for yourself! (The image with sprocket holes was taken with the Mamiya and the rest with the Flektogon.)

Only used this film once and found it easy to get along with. I like the tones and it gave me a base line to compare my other experiences with Pan film. Will be using it again come the summer.

This film has great tones and grain, especially for half-frame. The few light leaks of my Olympus Pen EE2S give great results on this film. Also, it is might be trivial, but I love that the film is numbered FOR half-frame

If you're after high contrast B&W this film fits the bill. In bright light outdoors the speed is not an issue and handles contrasty lighting well. There is still a good range of tones in more muted light though. Overall I was really pleased with the results but will be trying other B&W films to compare. 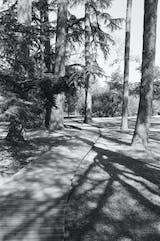 Thoughts after a first couple of rolls: for the price its a very nice film. Seems to produce a good range of tones. Maybe there's a bit more grain than I would expect for an ISO100 film...but its certainly not unpleasant so to me thats not a problem!
Sample shot taken with Olympus Trip 35, shot at box speed and developed in Caffenol.

Oh...and dont try to pinhole it unless its a very bright day or you have a lot of time on your hands...the reciprocity failure rate drops off pretty quick!