Whenever I pull RPX from the spool I immediately shed a single tear, for the film is quite possibly the flattest I’ve ever seen straight from the tank. Even HP5, which dries flat, has a slight curl when pulled off the reel. For that alone, I’m ready to applaud.

Exposure latitude is quite good, even besting perennial performers HP5 and Tri-X. With those more popular films I’ve had nothing but success when over-exposing between 100 and 320. RPX 400 matched those by producing excellent results anywhere from 200 to 400. But there is a downside; RPX develops a bit flat, even when using a high-contrast developer like HC-110. While midtones are wonderful, things are generally pretty grey, and this lack of contrast is probably RPX’s biggest weakness (for those who want that punch).

Despite my attempt to give this film a fair shot with a sharp developer (HC-110), my results remained a bit soft across all exposure indices. Of course, sharpness doesn’t mean much at all, but if you’re after that bite you’ll want to look elsewhere.

It took me a while but I finally got around to trying some RPX400. From the first roll I could tell it would become a firm favourite of mine.
The tones are what stand out to me the most - rich, inky blacks with highlights that keep details very respectably. It's certainly unique and difficult to get close elsewhere. It's an excellent look for most photo situations. I have not tried it with portraits as yet but I think it would shine very well and look extremely good (though care must be taken to make sure the deep contrast doesn't exaggerate any wrinkles which I suspect could happen if one doesn't keep an eye on the lighting).
Overall image quality is excellent, smooth, and grain is well controlled and non-obtrusive. It has a more modern look to my eyes rather than a traditional look.
I've used at ISO400 (box speed) perhaps occasionally erring on the side of slight over exposure and i've been quite happy with the results and detail in the negatives. So far all my RPX400 has been developed in HC110 including the sample picture here.
I have not tried pushing the film yet but it's on my to-do list. It already has nice contrast at box speed and pushing would likely increase that a bit so it would be an interesting experiment to try. Of course I've seen very successful pushing results online and have no reason to doubt that it's a good pusher also, but you can never tell these things for definite until you try them yourself.
The price I feel is very fair and about what it should be.
I'd definitely recommend this film. I tend to use different films depending on the situation but it's slowly working it's way into my camera bag more often. Very glad that I gave it a try.

Use HP5 alot, wish it had more contrast and punch?
Bam! Try RPX400 instead! I am certainly going to be using it more in the future! 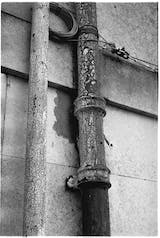 I'm generally not a big fan of faster films as I mainly shoot landscapes on a tripod. However, whilst travelling light during lockdown I have experimented a bit more to avoid carrying a tripod. I loaded this film into my "new" Leica iif and headed off to the seafront on a very windy day. The light was changing by the second and I used my mobile to meter. After getting a bit too close to an overtopping wave, I had an exposed roll of film and was drenched! I developed the film at home and, trying to keep any grain small, I decided to try Ilfotec LC29 and use the time recommended on the Massive Dev Chart for ISO400. The negatives were slightly thinner than I would have liked but that was probably my use of a camera without a meter in very changeable conditions! However, I have scanned the negatives and they have a good range of tones, although fairly low contrast, maybe a feature more of the 1950's lens. Printing the negatives in the darkroom has given very good, smooth prints with exceptional detail and tonal range and unbelievably fine grain for such a fast film. I would certainly recommend this film and I will probably be trying it 120 format in the future. 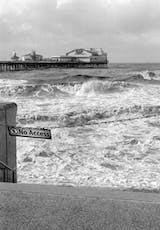 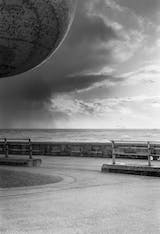 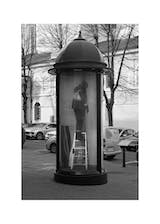