You can get really creative with this film. It was my first time shooting and some photos turned out underexposed so I'd er on the side of overexposure. Can also create interesting images during the day too!

I shot this film on a trip to Stockholm in winter and I think it was the best occasion for it: lots of clouds, super-short days and heaps of city lights! So I would say it's the perfect film for winter in Scandinavia. Defiantly to test on Christmas lights and markets. I used the 35mm roll and a Canon AE1 camera. This was my first roll of Cinestill 800t and I had huge expectations from it, (I saw so many pics) and I have to say that I was not disappointed. I will surely buy more of it!

Initially purchased this as a faster film to use under artificial light. Surprisingly, it also works pretty well as a daytime film, even when shot at box speed. I tried this in my Olympus OM1, and for daytime shots used a B&W KR1,5 Skylight filter, which helps balance out the slight blue tinge of the tungsten white balance. Even shots of fresh snow in bright daylight have a pleasing look to them.

At night this film gives a distinctive look, with points of light (particularly red light) flaring out and giving the film its trademark halo effect. It does seem to have a few irregularities, with random light bleed sometimes appearing across the image, but I think this is just a character of the film.

Definitely a film you'd use to capture a specific 'look', rather than a neutral general-purpose film, but far more versatile than just a film for nighttime shots and crazy halo effects. 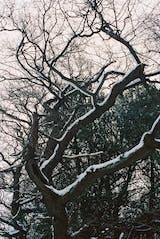 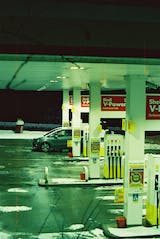 Really quite a unique film, I love the warm glow and halo effect you can expect shooting at different light sources. I can't think of another film that gives you the same vibe.

I've stopped up on this film but super comfortable at box speed.

I had previously been recommended this film as I normally shoot in low light and struggled to find a film which truly captured the “gloomy neon glows” which are sometimes associated with night-time photography . It’s safe to say I was far from disappointed with the final results! In the right conditions, Cinestill 800T produces a very cinematic, hazy vibe which brings out some interesting colours and tones in your night photography. A very distinct look which is instantly recognisable.

If you take the time to experiment with this particular film you can expect some amazing results which would be hard to replicate with any other film type. Many prefer to push this to 1600 ISO for effect but I’ve had no issues with shooting at box speed. I have been more than happy with my results and will certainly be using again. Highly recommended!