I think there's a learning curve using this if you're a beginner - but this shouldn't hinder you at all, shooting on analogue (even if you're more experienced) is full of mistake-making and risk-taking. It can produce the most gorgeous panoramic images with fully exposed sprockets and I personally had no trouble with the alignment in-camera. I used it in a Mamiya RZ67 and it worked beautifully. Would recommend to anyone with an abundance of 35mm to use or wanting to experiment mixing formats.

Since 120 film transfers to the take up spool at the end of a roll rather than being rewound, you can use one of these to wind the film back into the canister manually inside a darkbag. If you don't have a darkbag, consider buying two sets of these and using one with an empty film canister to make your own 35mm take up canister.

I've not tried the second method but it may make it easier to change rolls on location rather than fidgeting inside a darkbag in public like a weirdo. If you already own a darkbag and don't want to buy a second pair of adaptors, you can tape a bit of film (on both sides) to a 120 take up spool and tape that to the film you're going to shoot.

The image shows my set up but also that the adaptors don't fit 100% snugly - this causes no issue and they work fine. They also seem quite sturdy. 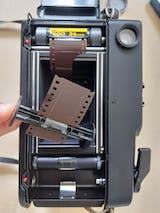 I have used the adaptors with a Zenza Bronica etrsi and a 120 film back. It does exactly what it is supposed to do. It is a fun, and cheaper, alternative to a 135 film back. You will get less frames than what it is stated on the film canister, because of how much of the film is advanced by the camera. You will get the image on the sprocket holes which makes it fun and different. Definitely recommended!

Tested last month and worked perfectly, I used on one roll but more to come, I recommend it if you like to experience new ways to shoot on film.

This fits the 35mm snugly & is fairly easy to load & unload, but it takes a lot of trial & error before I got results I was happy with - could start getting expensive if you get hooked!