I'd advise shooting in even light (for beginners) or metering carefully for the subject - overcast conditions, or consistent building shadows for street photography. You will simply not be able to capture detail in both bright and dark areas. 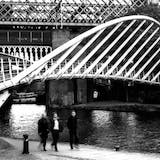 Captures light and glares in a very interesting way. However, needs a bit of practice to learn how to expose it correctly. Very strong contrast, perfect for sharp lines, bridges, buildings, and in general architectural photography.

I picked up a roll of this in 35mm on my first order, and first foray into film photography for about 20 years, because I'd always liked contrast. Then, a couple of friends who shoot digital and habitually turn the contrast up full on graveyard shots commented that you "can't get that effect on film". Challenge accepted!

Ignoring the suggestion from Washi to shoot in diffuse light I headed to a graveyard I'd been meaning to visit on a cloudy with sunny spells day and... wow! Being used to wringing maximum contrast out of the likes of pushed HP5 I (naturally) shot most while the sun was between clouds. I should have listened to the makers and waited until it hid.

The shots that worked really worked, the ones that didn't were kind of a mess of "Black or white" and disappearing signposts, with essentially zero grain. Very careful metering is definitely the order of the day, and cloudy is probably a good idea as well! There are grey tones between the extremes, but blink & you'll miss them.

Probably better for architectural / street / generally man-made subjects because the detail in vegetation tended to get lost to the black or white effect unless it's silhouettes you're after . But for hard edges and defined shapes this could be a killer with a little familiarity. Portraits could also be interesting but I've never really got to grips with them so will leave that to others.

Think I could learn to absolutely love this film but that'll have to wait until it's back in stock because there's a definite learning curve for it so may take a few rolls. Also, I think next time stand processing rather than the datasheet's suggested 11 minutes in Rodinal 1+25 might be a safe move.

Will I buy again? Just try to stop me (oh, and I won the bet with the digital friends :P )

This film has very low latitude and takes careful metering (or a willingness to experiment and perhaps lose a few frames) but does reward you with extremely fine grain and a sharp edge to detail. I shot a roll at the Notting Hill Carnival 2019 in a Hexar AF on auto exposure, and had some shots blow out almost completely, but when they worked I felt they had a great atmosphere.

I'd advise shooting in even light (for beginners) or metering carefully for the subject - overcast conditions, or consistent building shadows for street photography. You will simply not be able to capture detail in both bright and dark areas.

Note that this is hand rolled and not DX-coded, so you will need a camera that lets you manually select ISO. I stand developed for 1h in 1+100 Ilfotec LC29.

Having used both Washi V and A, I decided to try S.

Contrast is phenomenal and the grain makes the contrast superb. Also being ISO 50 it is much easier to find a camera which can meter correctly.

The detail on this film even when scanned at low res is really good, in brick buildings you can count every single brick.

I would highly recommend this film (as with all Washi film)