This film produces pleasing contrast images of a medium grain. The grain doesn't become too much even when developed in Rodinal 1 part to 50.

However, the film base is terribly thin making it difficult to load and liable to crease in the spool. Once that happens, which it will, the film base is so thin that it creases like paper, you will struggle to load it further.

Love the tonal range on this film, great for street and architecture. Handles low light well, and not bad in sunlight either. 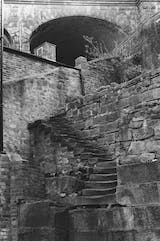 For a cold somewhat dark morning, this film captured that mood and magnified it.

Loved the way it renders water and damp. It should be an excellent film to load into the Rollei 35 and shoot some street.