Fujicolor 業務記錄用 is translated as “Operational Recording” but goes by the more common name of “Fujicolor Industrial 100 Film.” It is normally only available in Japan, but we have found a way to sustainably source it and bring it to the European and American markets! Fujifilm Industrial 100 is a gorgeous colour negative film with exceptional sharpness, natural skin tones, and faithful colour reproduction.

To understand more about the details above you can check out our film guide or if you want some inspiration then head over to our page on choosing your next film. And if you want the full details about the film, including technical information, read about Fuji Industrial 100 over on EMULSIVE.

When you buy your camera film from us we can ship it across the UK, Europe, USA, New Zealand, Australia and Canada (more countries planned soon!) So buy your Fuji Industrial 100 35mm Film today and dive back into the fun of 35mm film photography!

I don’t shoot too much Fujifilm because it can have a green tint to it but I shot this on a sunny day in Aberdeen and loved it. 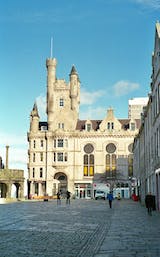