On last night's Analogue Television show with Rachel Brewster-Wright we discussed how simple it is for people to make their own pinhole film camera from items in their home.

And to prove the concept Dale Willetts has just shared with us a camera he made out of Analogue Wonderland's packaging! He's kindly written up the entire process so it can be duplicated - what a wonderful bank holiday project :-) Note that the box he used is our old packaging currently being phased out, but the premise shows that you'll be able to use anything similar.

So, it's nearly the end of April 2020, the Corona virus lock down is in full swing here in the UK. You've already been out for your one hour's allowable exercise.... and you're BORED!

This was me, and my predicament. I was sitting in front of the PC considering my options for alleviating the boredom when it happens. I spot a small cardboard box I'd received some film in from Analogue Wonderland that I hadn't yet got around to recycling.

That's when the light bulb moment happened. "I wonder if I could make that into a camera?"

Now I enjoy all forms of photography, but i do love pinhole photography and I enjoy making pinhole cameras. But making a camera out of a piece of packaging that's basically brown card and full of fairly obvious holes where its folded together....... “Nah! That's a stupid idea” says the sensible internal voice. “Cool, let's do it” says the up for a challenge internal voice, (did I mention the lock down ?..... and boredom?) 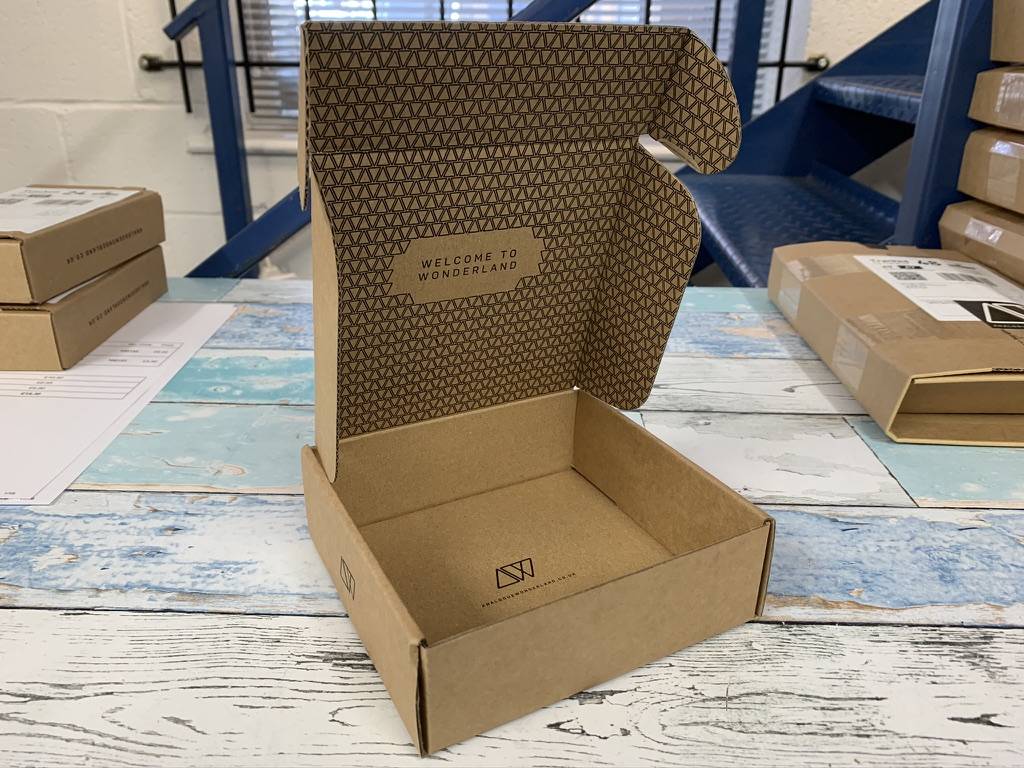 What Do I Need? 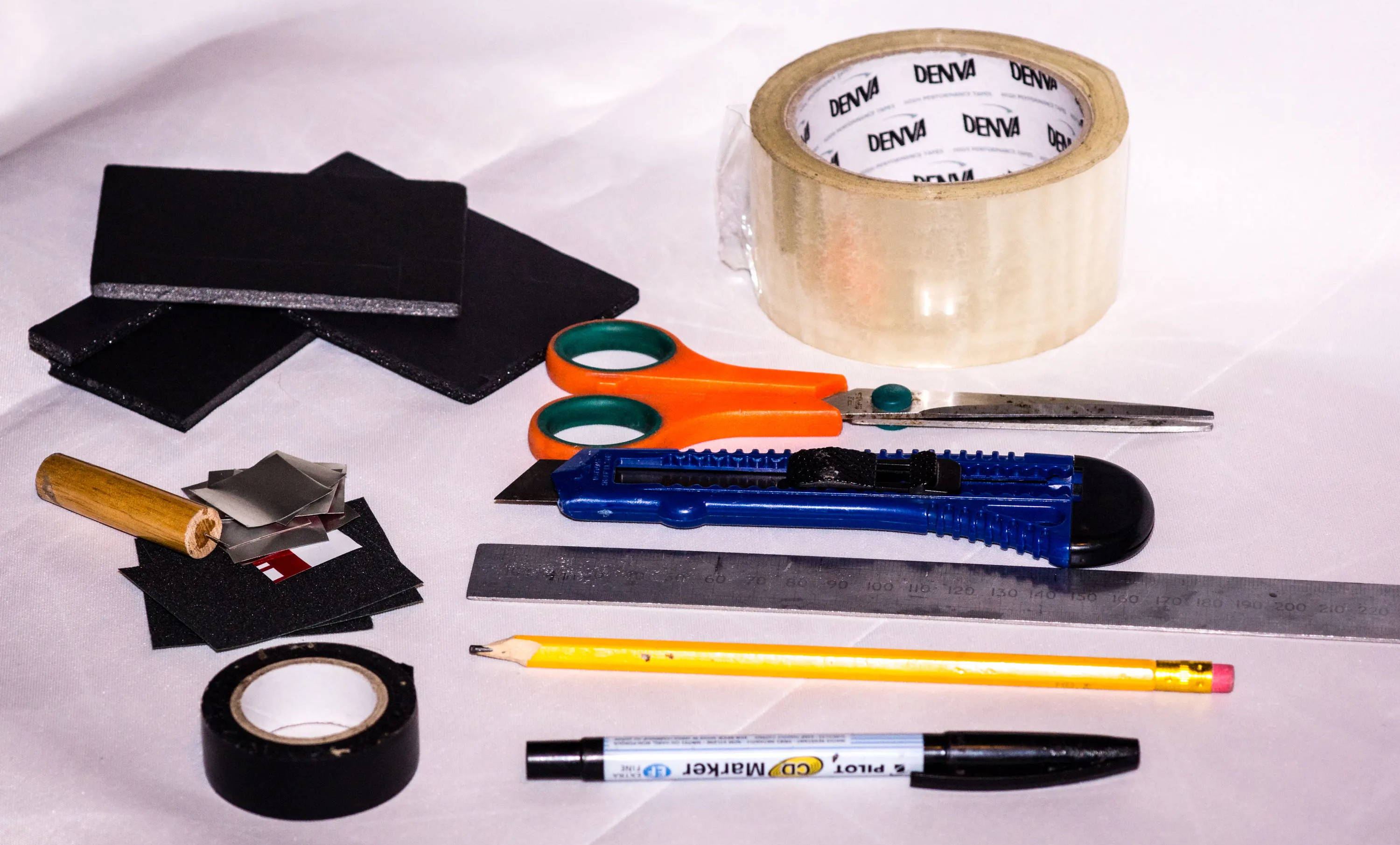 I love it when a plan comes together

The initial construction was simply a matter of using the black electrical tape to tape over all of the edges of the box where there are slots and tabs used to hold the box together. And the slots created at the back where the sides of the box are folded. Basically anywhere it look like light may get in.

I then realised that when the lid folds down and is secured with it's tabs the four corners wouldn't be light tight. This is where the foam core board off cuts from previous camera builds came in. Three pieces cut to fit inside the box along the front and sides, leaving a small gap between the side pieces and the side of the box for the lids tabs. The foam core is roughly 5mm thick so once the three pieces are taped into place they form a light tight baffle around the edge of the lid and also hold the paper negative in place as it can be slid into the box under the foam core.

The next decision was where to put the pinhole. Normally this would be smack bang in the middle. But I wanted to keep the logo intact.

Light bulb moment two, cut out the triangle that represents the “A” in the Analogue wonderland logo and put the pinhole there.... obvious really.

My standard shutter on pinhole cameras is a short length of electrical tape over the hole. However I didn't want the tape to possibly tear the box material which could cause light to leak in. Another easy fix, put a square of normal sellotape over the logo and cut out the triangle where the pinhole is. The shutter tape won't cause damage and will come off easily. 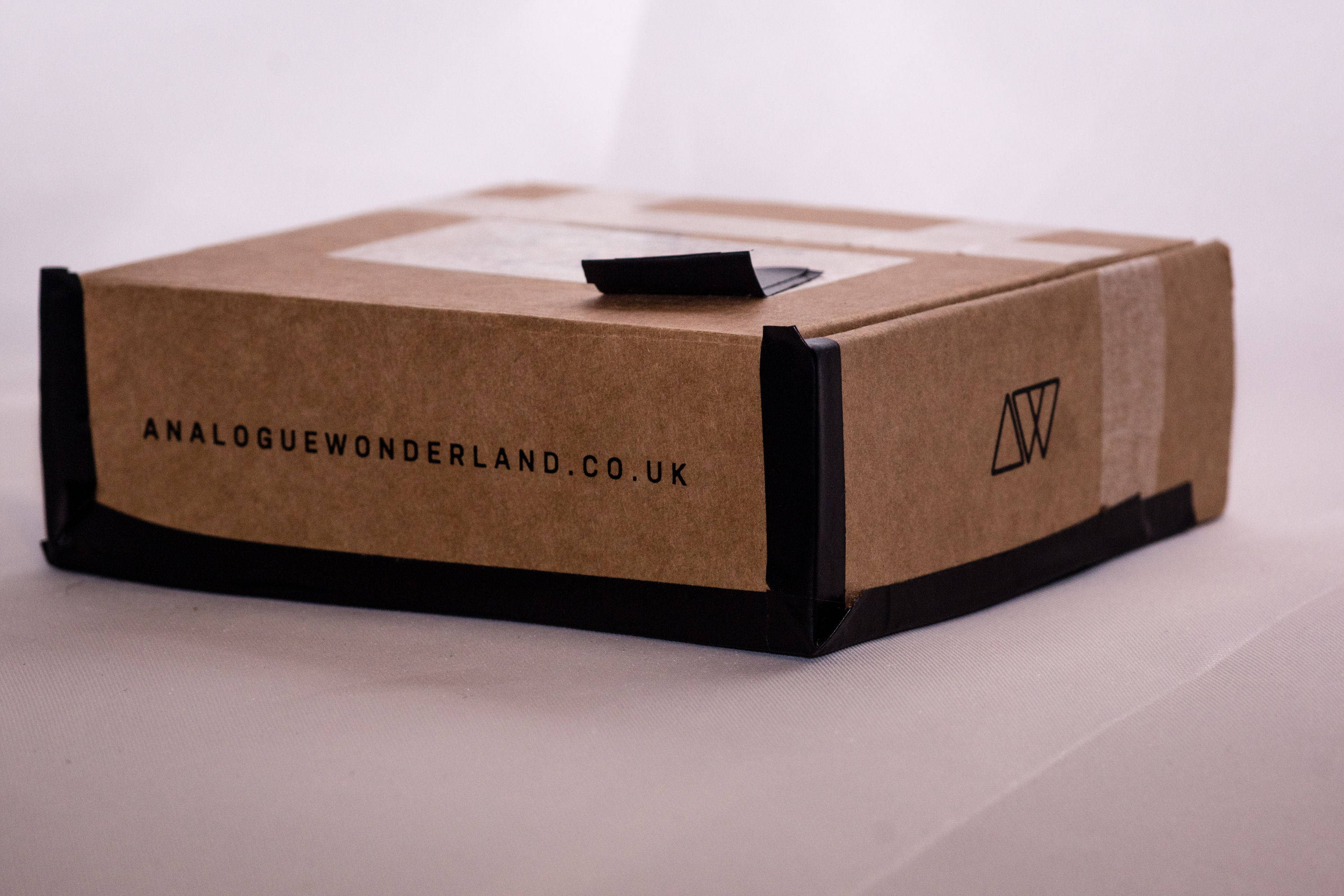 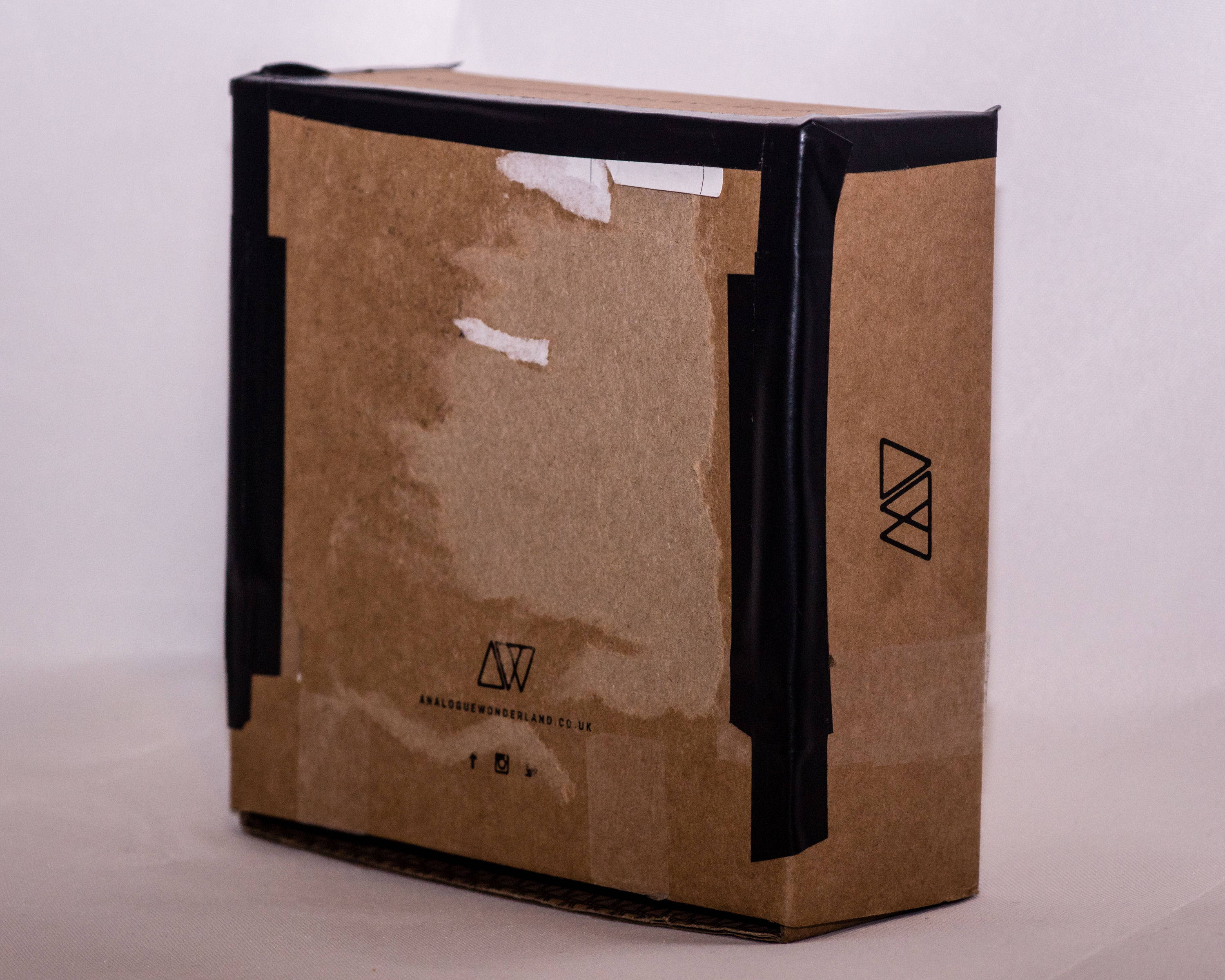 The pinhole itself I already had made, but again it's an easy job. Take a small square of drinks can. Gently poke a pin into it until it only just pierces through the aluminium. Use the sand paper or fine wire wool to sand down the raised bump created on the backside of the aluminium.

Measuring the depth of the box from roughly where the pinhole sits to where the paper will be is 45mm. Using this measurement and the 0.298mm of the pinhole in the design calculator gives an effective “F stop” of F151 for use when deciding how long your exposure will be. 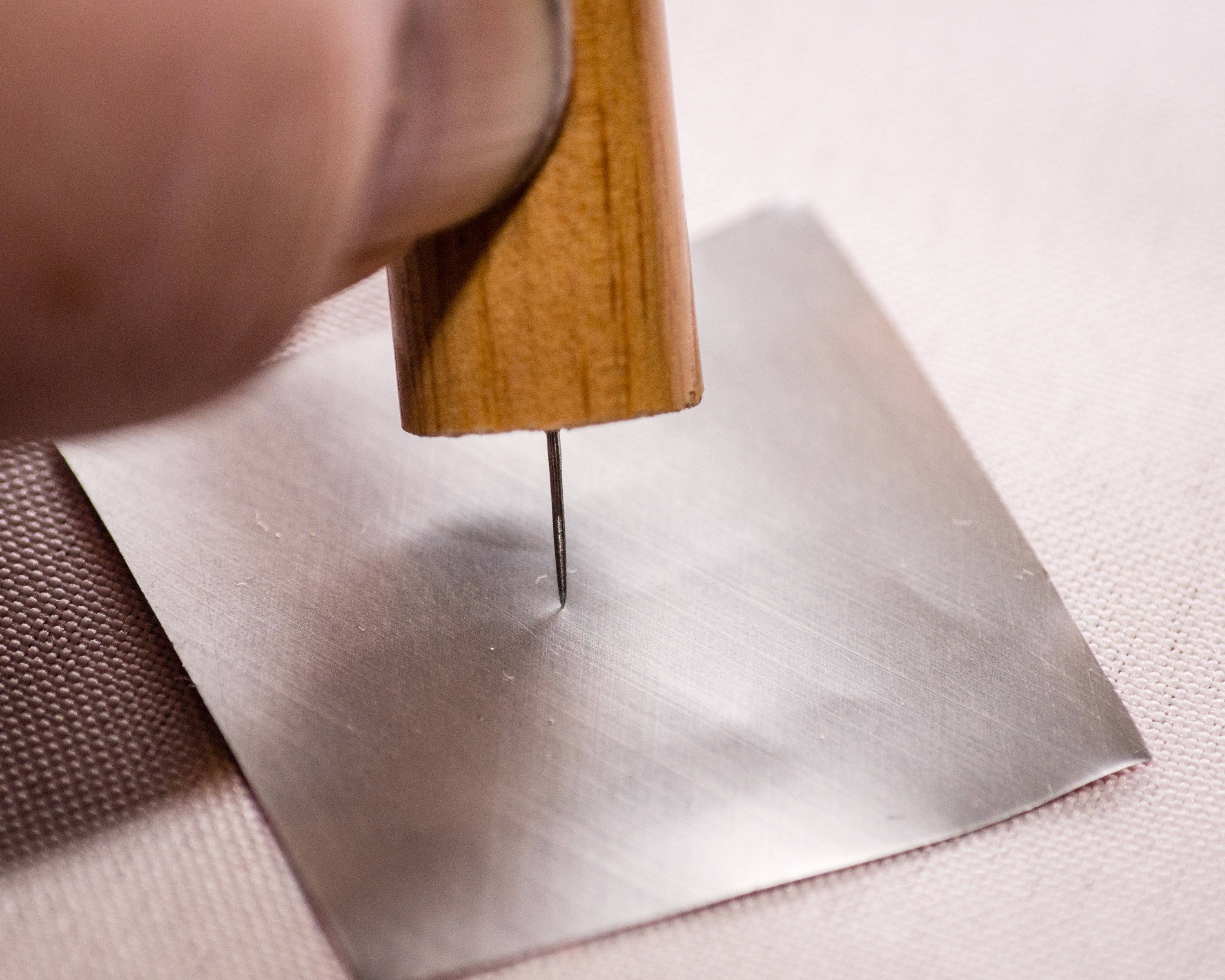 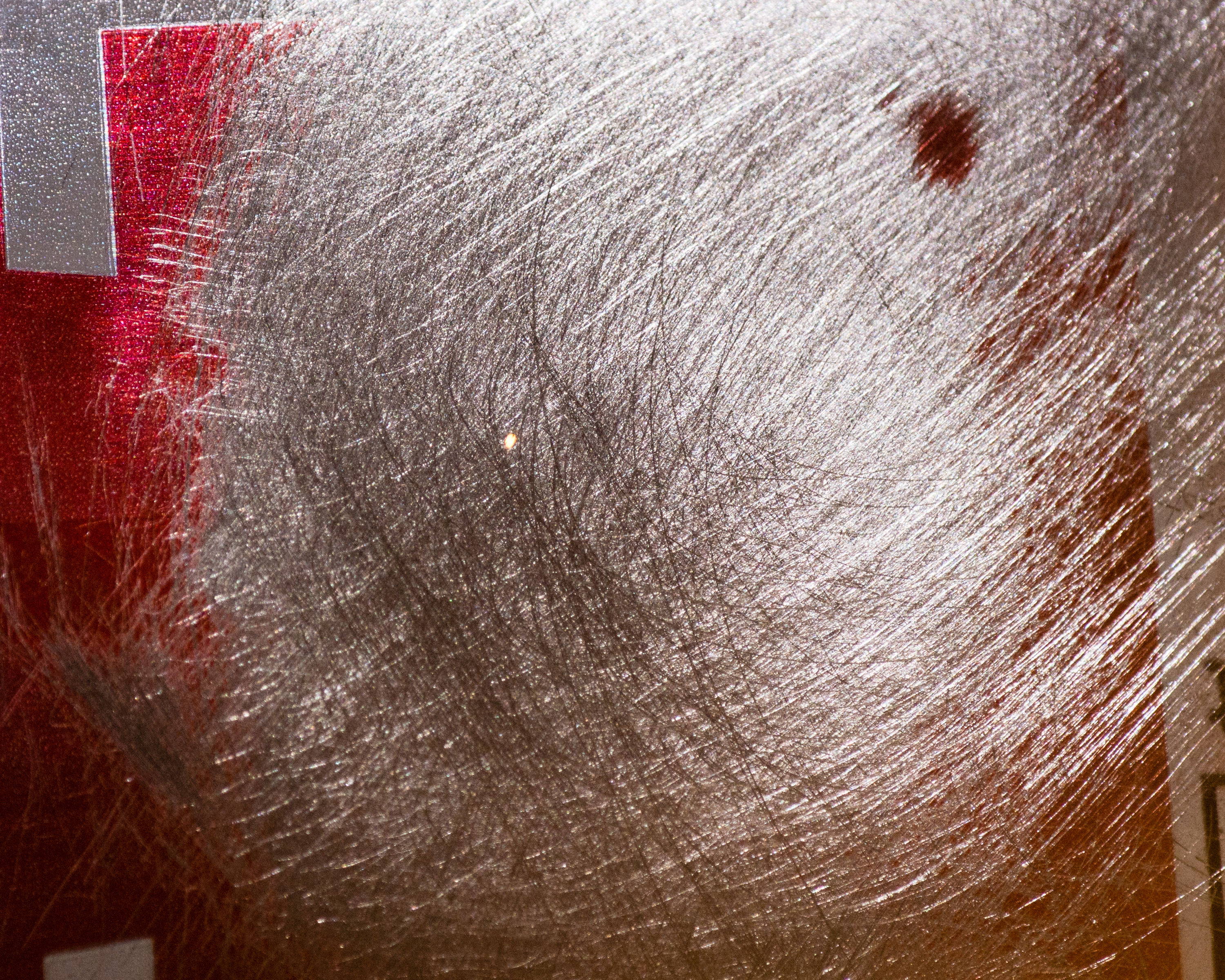 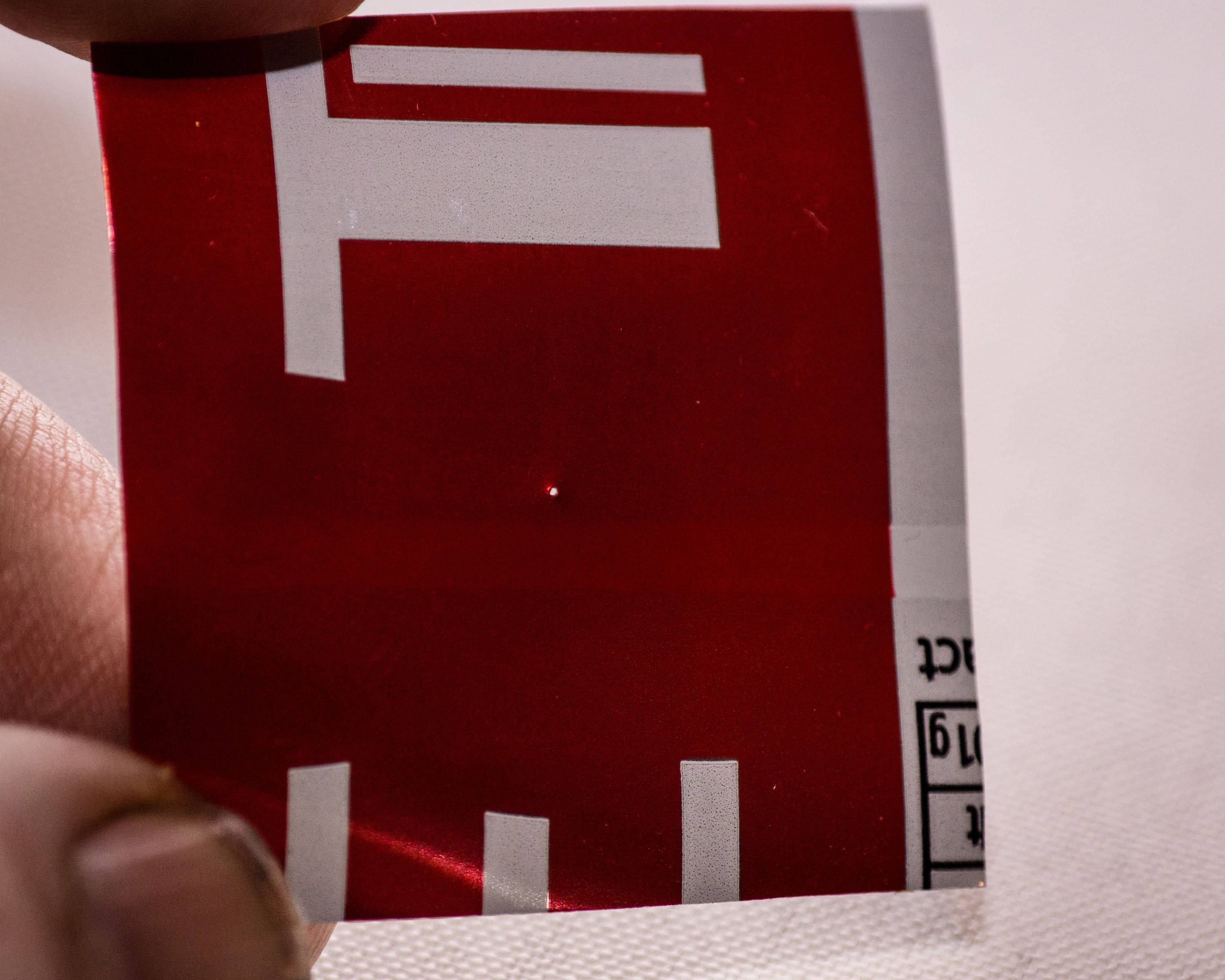 A little light rebranding on the front logo :-D 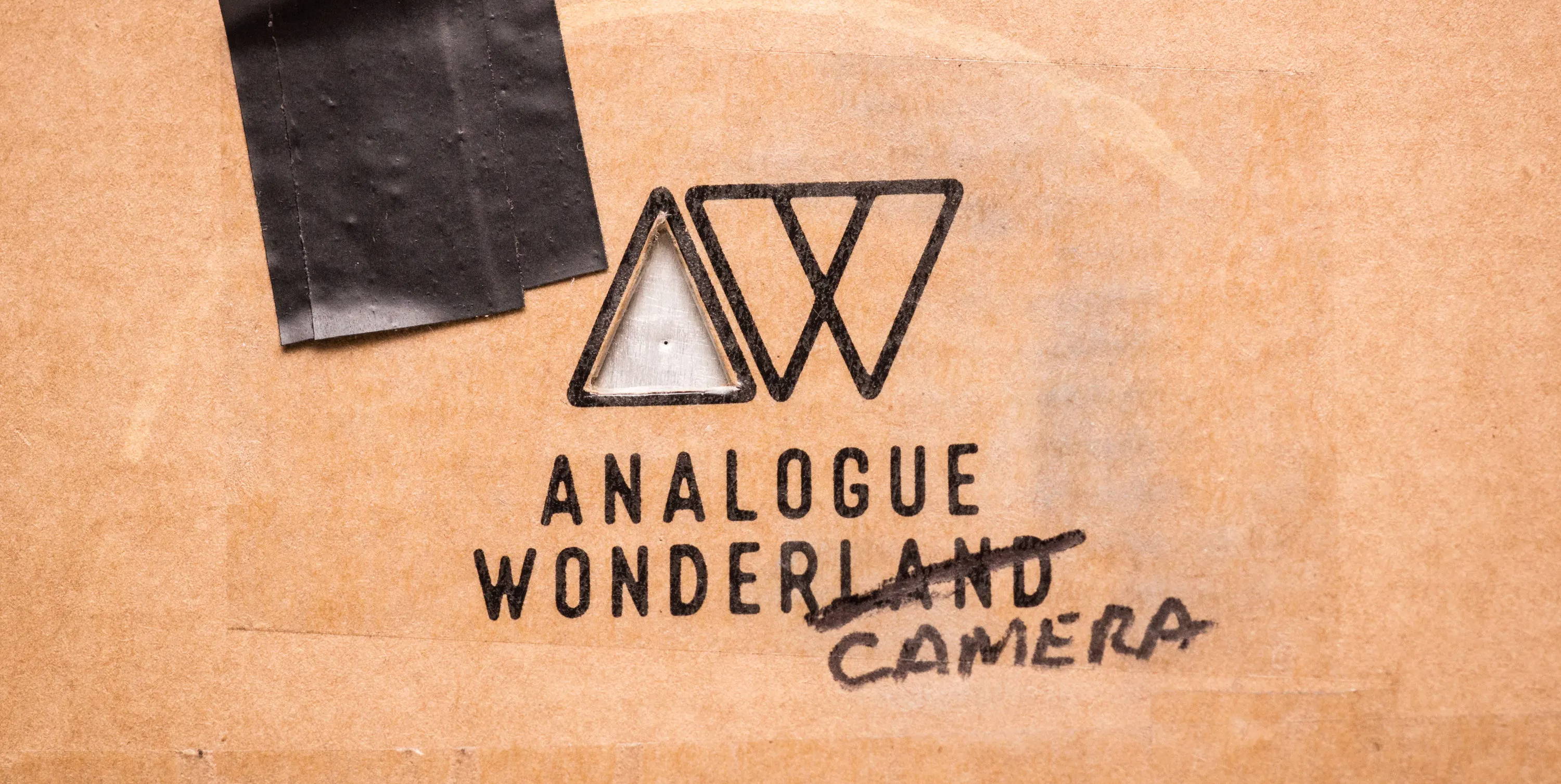 My lawyers will be in touch

So, job done camera made. Boredom alleviated....... BUT! Does it actually work?

So far at the time of writing this I have only made two photographs with this camera in my garden just to see if it would work. As you can see below, it does.

I used some old Kentmere paper which I rated at E.I. 3. This using the light meter app on my phone set at iso 3 and F151 on a fairly bright but cloudy day gave me eight minute exposure times.

The pictures came out well though the centre of the negative is slightly over exposed so if/when I use the camera again I will try using it at F100 to give a slightly faster shutter speed which should give a better exposure in the centre if slightly darker edges. 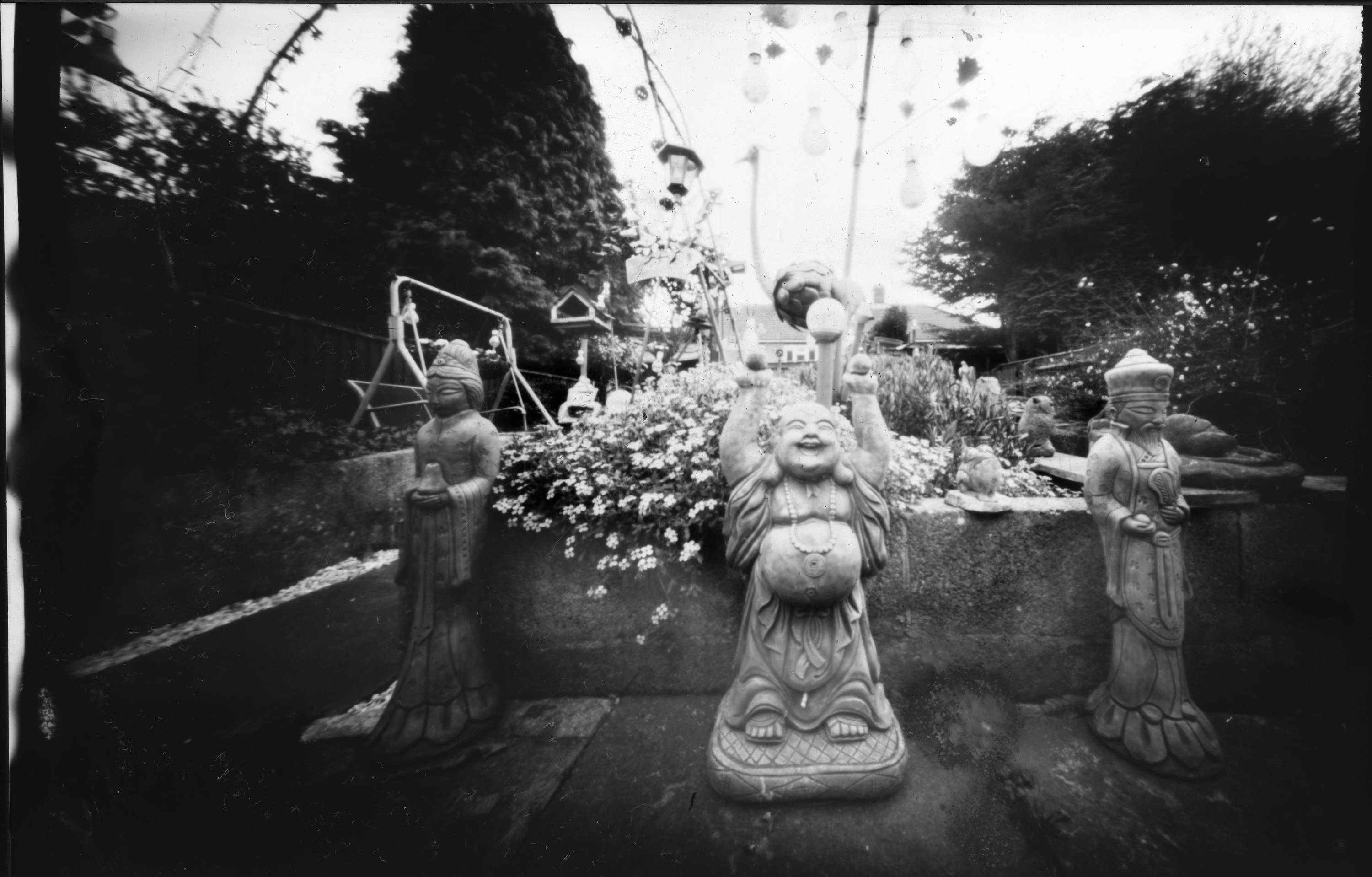 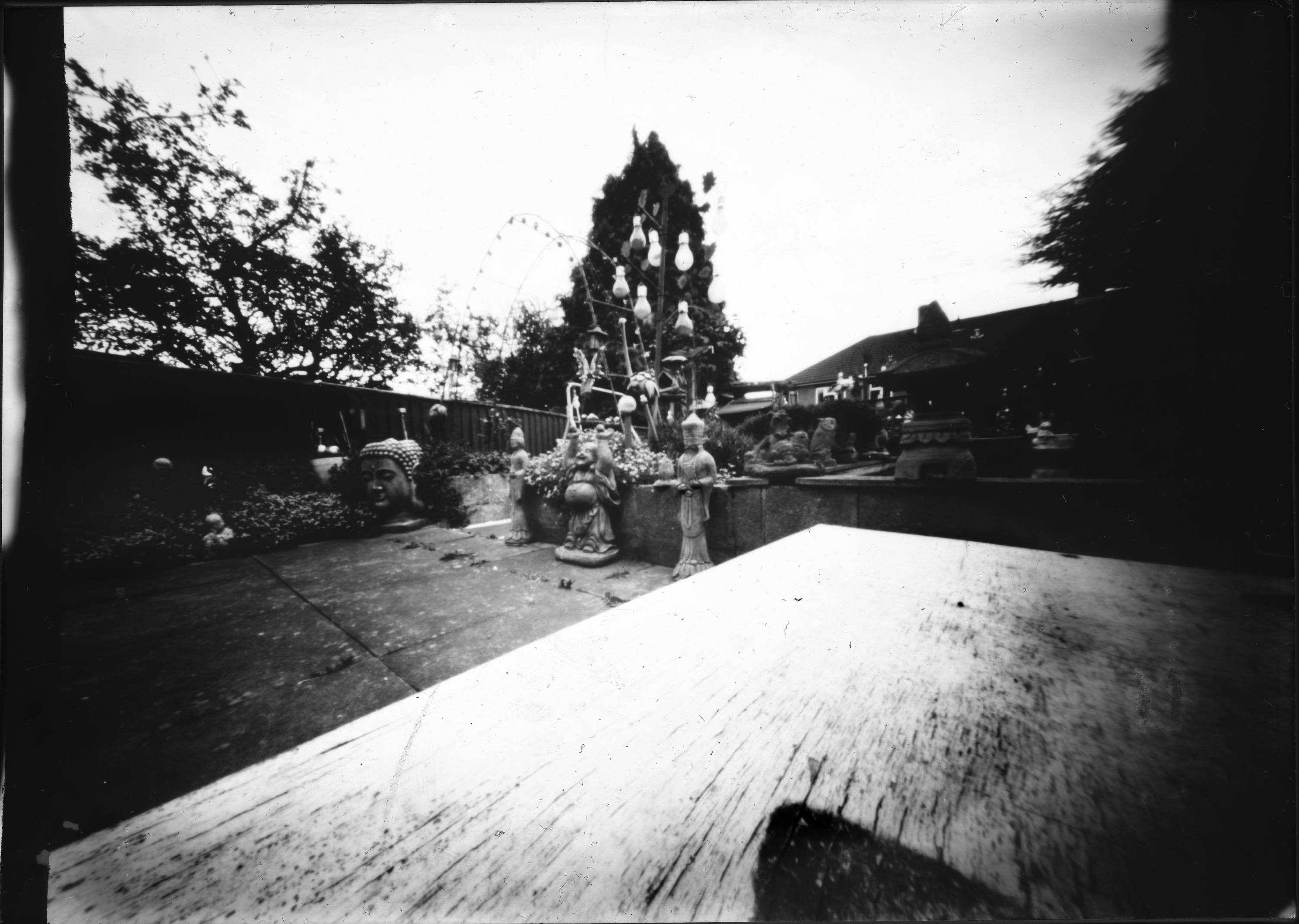 So, job done camera made. Boredom alleviated, AND I have a working camera.

In case you are interested the total build time to make was roughly 30 minutes give or take. After posting about the camera on Instagram Paul kindly asked me to write this blog post.

Writing about the camera took at least three times as long as making it....So I'm still not bored again. Yet. 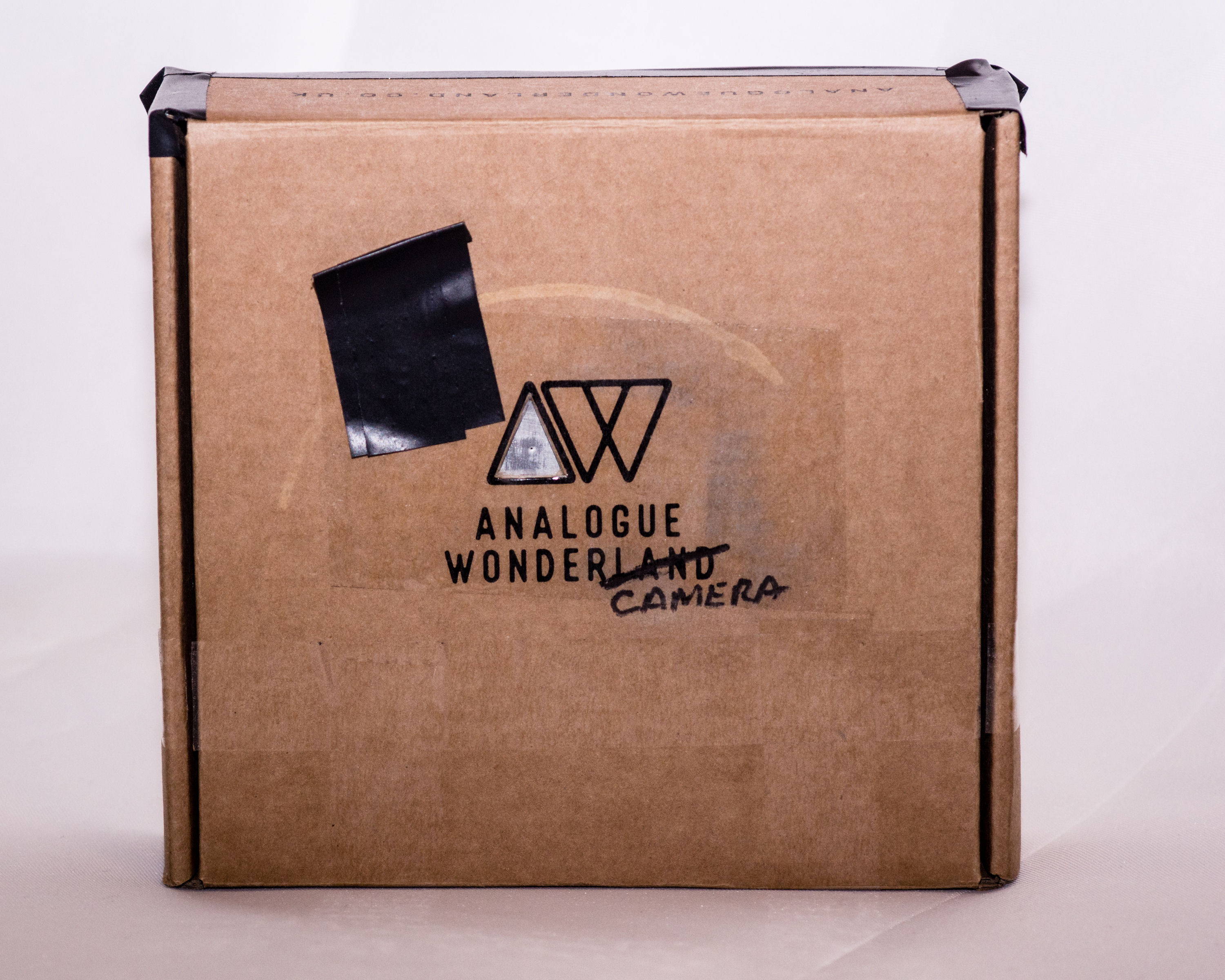