Dry Plates for replicating photographic techniques and results from the 1880s! Wonderful glass plates, a true piece of history for the modern world.

Please note a couple of important points and there is much greater detail on recommend usage and tips below the specs table:

These plates are coated with an ultra fine-grain, high contrast orthochromatic emulsion with response from UV through the visible spectrum up to 610 nm. The high contrast is excellent for alternative process printing or for printing onto multigrade paper at grade 0. The long toe of the characteristic curve preserves shadow details for scanning. As with other primitive processes, the effective speed of the plate will vary depending on actual UV levels. The emulsion has been designed to meter at ASA 25 under early spring northward lighting at moderate latitudes, but expect actual speed to vary by up to a stop or more.

OPEN BOX ONLY UNDER SAFELIGHT!

The unexposed plates can be viewed and loaded under any darkroom safelight suitable for photographic paper. A locating notch similar to that used for sheet film is provided for locating the emulsion side of the plate. Orient the Plate with notch at top right and emulsion will be facing you.

Developing by inspection, do not pull the plates until details are visible in the shadows.

Emulsion will be visibly swollen and shiny while still wet.

The non-emulsion “glass side” may have excess emulsion remaining from the hand-coating process. After developing, this excess emulsion can be removed with dilute bleach, disinfecting wipes, or equivalent. Easier to remove when wet.

When you buy your camera film from us we can ship it across the UK, Europe, USA, New Zealand, Australia and Canada (more countries planned soon!) So buy your J Lane Speed Plate (Sixth Plate ISO 25) today and dive back into the fun of dry plate film photography!

My daughter gave me a Busch AG glass plate camera, with a Compur shutter as a display piece. I was delighted to find that Analogue Wonderland stock these J Lane 1/6th plates, which fit it. So why not see what it could do? Well it can still take photos after 100 years.

Glass plate demands you slow down your photography, learn to take care (to avoid light leaks), double check all your settings, adjust for UV light, use a tripod etc etc. But the effort is worth it when you see the plates develop under a safelight. My plate developments are only the second time I have developed "film", so these are clearly manageable for beginners.

The images look vintage and are a delight. I am very pleased. 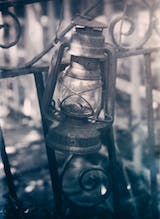 After owning a Rolleiflex 3.5E for a number of years it was with embarrassing delight that I realised only recently, that you could take the door off and replace it with an accessory door that took lovely brass dry plate/sheet film holders. This plate door and holder is in itself a thing of beauty and if you fancy trying glass negatives and have a suitable Rolleiflex grab one on ebay and head over to AW store.

Now I opted for the ISO 25 plates, I have some ISO 2 4x5 plates but can't shoot those yet till I get the plate holder from the kickstarter. The ISO 25 plates are described by Jason Lane of Pictoriographica as contrasty but suitable for making lovely prints on grade 1 paper. There is limited development data but times are given for D76 stock so I used ID11 which is the same thing pretty much.

Bearing in mind the liklihood I would end up with a steep contrast curve negative I decided not to shoot on a bright summer day so, when the sun went behind the clouds I loaded a plate into the holder (you can do this under a dim red light AND the plates have a small notch in them like sheet film to tell you which side the emulsion is on) and headed down to the potting shed at the end of the garden.

With a Rolleinar 2 close up filter and a sturdy Manfrotto tripod I set up a basic still life of a ball of twine and a rusty garden hand fork thing. A small lastolite reflector helped bounce some light to the "darkside".

Now then how to set you meter.

The speed of these plates will vary depending on the amount of UV light that is present and Jason gives some guidance on this, but for the first exposure I set my incident meter for ISO 25 (box speed) and made an exposure. Trotted off to the darkroom and tray developed in neat ID11 as per Jason Lanes instructions in open trays under my red safelight for 9 mins agitating once or twice every minute.
I was overjoyed to have an image but it was a bit lacking in shadow detail so I exposed another at ISO 12 and this was spot on for shadow detail, pretty contrasty though so next time I will likely reduce development by 15-20%. Remember to change ONE variable at a time to stop yourself getting in a muddle.

Once dry I placed the glass negative onto the glass carrier on my Devere 504 and made a print I was pretty happy with at grade O.

Photos show the set up and plate holders, a picture of the enlarger baseboard projection, the glass plate and a print photo as I was washing it.

Very excited to use more plates. 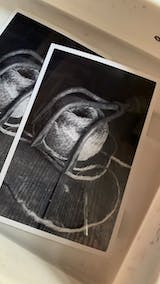 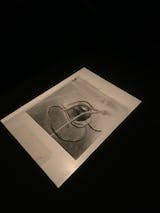 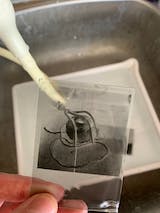 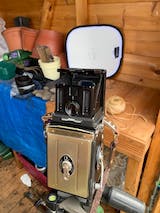