A wonderful black and white film to bring your SX70 Polaroid camera to life. Fantastic contrast and the timeless look of B&W, one of my favourite films for portrait shoots. NB: check your camera type and make sure you're buying the right film format (600/Spectra/i-Type/SX70) - check on Polaroid Originals if unsure!

When you buy your camera film from us we can ship it across the UK, Europe, USA, New Zealand, Australia and Canada (more countries planned soon!) So buy your Polaroid Originals Film SX70 B&W ISO 640 today and dive back into the fun of SX70 film photography!

... Shame about the price and the requirement of a boat load of light. 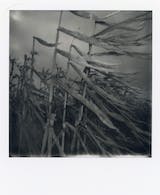 Photos do come out looking great, but for that price you'd hope to get 10 instead of 8 like we used to. Come on Polaroid!

This film is amazing. It isn't necessarily amazing value (I really do wish PO would reduce the price or include more shots per pack), but paired with the SX70 lens and either a flash or a sunny day, I am convinced that this is the best way to make instant images.

Things to know:
1) You need light. A lot of light. If the scene is too dark then you will either be given blurry or underexposed images - PO film doesn't handle underexposure that well at all.
2) With the normal SX 70 lens, images on this film are sharper than pretty much any Instanx I've seen (I know this is at least in part due to the lenses, but I'm not convinced Instax film can actually produce such sharp results as we see here)
3) Exposure time isn't that bad at all. Compared to colour images which can take up to a month to fully develop, B+W film is mostly done in about an hour, with the majority of the development done within 20ish minutes in my experience
4) It ain't cheap. But you get what you pay for, and I'd rather support PO than have (another) camera that I can't use