﻿Note that some of our rolls are being sold without boxes. These films are still fresh and come in the secure plastic canister.

A reliable and good-looking black and white 35mm film, this emulsion will suit most shooting situations and consistently deliver images with great detail quality and retro look.

When you buy your camera film from us we can ship it across the UK, Europe, USA, New Zealand, Australia and Canada (more countries planned soon!) So buy your Rollei Retro 400S Film 35mm B&W ISO 400 today and dive back into the fun of 35mm film photography!

Really enjoyed shooting with this film. Worked well in the sunshine giving nice contrast but some of the photos came back looking a bit underexposed and read the 400 iso may not be the true rating and to possibly try 320 iso so will try this next time. Photo taken with Yashica 35 Electro GT.

I've used this for regular B&W photography where it is rather high contrast, but nonetheless does the job well. Great for atmospheric street photography, architecture or creative work. But I want to concentrate this review on the infrared properties of this film. It's not an IR film as such, but does have IR sensitivity in addition to it's regular panchromatic properties. So, slap an IR720 filter on your camera, meter for ISO25 and you can take infrared shots. With Rollei Retro 400 such shots are simply stunning when you get them right.

As a regular B&W pan film, it is a little high contrast but within this constraint it's lovely and cheap.

OK my sample photos are terribly scratched but that's down to operator error. I was in a bad mood when loading the reel, it jammed as it sometimes does, and I forced it – hence all the scratches. But that's all my own fault, no reflection at all on the film.

I was expecting something similar to Rollei Retro 80S which is one of my favourite BnW films, but 400S seems more contrasty. If I try it again, I might rate it at ISO 250 or so, to try and retain more shadow detail (and indeed, looking at other reviews on this site, the sample photos look a tad dark to me). But if you like that look, go ahead and shoot at box speed and develop as normal, you will not be disappointed! I also noticed that the grain is surprisingly fine for a 400 speed film, and the film base is quite transparent which makes it easy to scan.

I came across this film on Analogue's website and liked the description of it, particularly the almost transparent base, so ordered a few. I also have recently begun developing my own films, getting all I need for this from AW as well. After a bit of a shaky start (you know how it is......!) the most recent film I developed has come out beautifully, in my eyes, with lovely deep blacks and a fine contrast. One thing which may have contributed to the clarity of this film is the fact that I accidently pushed it as I had the developer too warm (25ish degrees) and didn't realise until I was halfway through.
The two photos give a good idea of the films versatility, the Banksy was taken on a cold overcast day and the other on a bright sunny day. The detail in each is really good I think, bright and clear.
One thing to be aware of with this film is it does seen to be a sensitive to handling, I managed to ruin one when loading onto a reel, I creased it badly, but that could just have me being too rough.....

After receiving this film in the wonderbox I loaded it into my olympus xa2 and went to take some photos around Bath city centre on a rainy day. I found the film to give great contrast and a reasonable grain. I wouldn't have normally picked this film up but its certainly a good value black and white film. 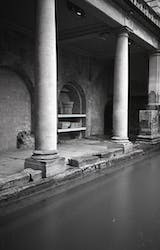