The first original B&W emulsion for over a decade, Pancro 400 120 film's launch in 2017 was highly anticipated by medium format photographers who praised its clarity and exposure latitude. This partly comes from it's rare double-emulsion set-up which allows for different sizes of grain in the final image.

A must-try for any serious black and white photographer! Also called Pancro400, Pan 400 or PAN400.

To understand more about the details above you can check out our film guide or if you want some inspiration then head over to our page on choosing your next film. And if you want the full details about the film, including technical information, read about Bergger PAN400 over on EMULSIVE.

Bergger is an exciting French company which provided one of the highlights of 2016 by announcing they were producing a brand NEW B&W film for the market - the Pancro 400. Unlike many films which have existed for decades, Bergger has invested in research and development - as well as machinery and people - to innovate and explore new possibilities. Combining brand new technology with age-old formats has proven a hit already, and they will surely grow in prominence as their product line extends.

When you buy your camera film from us we can ship it across the UK, Europe, USA, New Zealand, Australia and Canada (more countries planned soon!) So buy your Bergger Pancro 400 Film 120 B&W ISO 400 today and dive back into the fun of 120 film photography!

I usually shoot hp5 and have grown to love that film but after trying two rolls of this through my Pentax 6x7 I don't know if I could go back. It has amazing exposure latitude and wonderful tones. Highly recommend for anything. 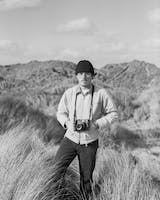 Hands down the best black & white film I've used, the difference between this and standard films does so much for the contrast and detail, I developed this used CineStill DF96 Monobath and the processing time is three times as long for this particular film and it definitely proves to be my favourite and considering its 400 ISO it has so many uses

Shot this film in 35mm and #120mm and was happy with the results nice contrast even developed it my self and the timings were perfect, although the definition was not as sharp as ilfordHP5

I've only shot one roll of Bergger Pancro so far and under less-than-optimal conditions: at a meeting of my local astronomy club where most of the activity happens in darkness (duh). I pushed it to 800, but in hindsight I should have gone for 1600 or even 3200. The Mamiya 645 is a heavy beast, not designed for handheld photography at slow shutter speeds. And while I had a fast lens – a Mamiya Sekor C 80mm f1.9 – its razor-thin depth-of-field (equivalent to a 50mm f1.2 for 35mm) makes it hard to accurately focusing in low light. I got a few usable shots (that is, if you interpret "usable" quite generously), and my initial impression is that the film (which I developed in D-76 1+1) has a nice range of tones with a somewhat "retro" look, and relatively low grain even when pushed to ISO 800 (if I get a chance to try more of this film under better light conditions, I will update this review). While the recent resurgence of film has led to a number of interesting respooled/repackaged offerings, completely new emulsions are still relatively rare, so I want to like and support Bergger and other companies who are brave enough to take the plunge.

From all the 120mm films I've tried recently, it's Pancro Berrger 400 which surprised me the most. For such a good price you'd get an amazing deal of variability, quality, contrast and detail - real black (& white) magic! 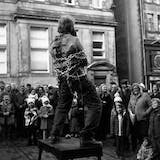