An excellent black and white professional 35mm film, Kodak T-MAX 3200 film is perfect for low-light situations. Kodak won the hearts of film photographers worldwide when they reintroduced this emulsion as P3200 in 2018. Their patented T-grain emulsion delivers impressive levels of detail in different — and difficult — lighting situations, especially impressive when rated at 3200.

It has also been optimised for high-quality scanning and enlarging post-development, so your photos will live in print and on screen in the highest possible quality. Go hunting in the dark, and enjoy the results!

To understand more about the details above you can check out our film guide or if you want some inspiration then head over to our page on choosing your next film. And if you want the full details about the film, including technical information, read about Kodak T-MAX over on EMULSIVE.

When you buy your camera film from us we can ship it across the UK, Europe, USA, New Zealand, Australia and Canada (more countries planned soon!) So buy your Kodak T-MAX Film 35mm B&W ISO 3200 today and dive back into the fun of 35mm film photography!

I've only shot the one roll of this whilst comparing with Ilford Delta 3200. I came away preferring the Delta but that's not to say this film hasn't got some good points to it.

It is very grainy. And it's quite a coarse grain, too. But the tonality I found really nice. So it ends up having a nicely gritty edge which could work well for the right subject. I'd definitely use it agan if I wanted a certain look. 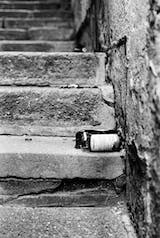 As expected the results from this film were very grainy, especially in low light. However I think this added to the atmosphere of some of the photos. Would use this again for the right occasion. 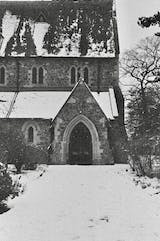 This was my first shot with this film, I love the grain and it's really quite contrasty in low light. It's great in low light but a little unforgiving, if you're doing any street photography at night, you'll get great results with nothing but ambient street light - but take a tripod! Air on the side of over-exposure with an expectation to push it in the developing process. I love how the film allows me to shoot at night without the usual wide-open aperture so you don't lose all depth of field.

Really a favorite. There's always one in my bag.

I planned ahead for my granddaughters birth and bought a roll of Tmax 3200 for our first meeting. I wanted a few film photo's to go with the digital images and managed to capture my wife saying hello to her. The light was terrible, but having set the asa to 800 I thought I was in with a chance with my Pentax SP500 and Lydith 30mm f/3.5 and I am pleased with the result. I still have half a roll left. I couldn't wait to see my images so put my camera and developing tank in my dark bag, cut the film off the reel and developed it as soon as I got home. 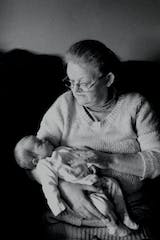 This was my first experience with T grain film, and I'll deffinately be shooting more over the comming year. This film is FAST...even in early February I had to use ND filters to get some shallow Deapth of Field shots, but well worth the effort. The contrast is perfect in my opinion, and the detail superb.
I chose to shoot this film at box speed, so loaded it into my Contax 139 Quartz as the camera has a 3200 ISO setting, and took it with me for a pre-Christmas socially distanced blast with my Brass Band (Fakenham, Norfolk, UK) and decided to take a few shots of my Tuba whilst I had it out. With all the curved reflective surfaces I wasn't expecting too much, but the results are far better than I expected. I developed the film in Kodak HC110 (Dil-B) for 10:30 at 20 Deg C, and found it easy enough to load onto the Paterson spiral. Yes, there is some grain in the images, but much less than I was expecting from a 3200 ISO film.

Would I buy this film again?...WITHOUT HESITATION.!! 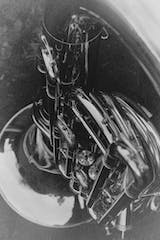