Kolor film is Revolog's top-selling film and for good reason! When put through your favourite 35mm camera, this film will add a rotating rainbow of different colours to your images for an unique and creative view of life

To understand more about the details above you can check out our film guide or if you want some inspiration then head over to our page on choosing your next film. And if you want the full details about the film, including technical information, read about Revolog Kolor over on EMULSIVE.

Revolog's films are unique and creative in the extreme. Each roll is hand-made with processes that will create beautiful overlaid colours or shapes on your final images. Based in Austria this small firm (Hanna and Michael!) are passionate about giving film photographers new options and opportunities to experiment and create. Sometimes mis-spelled as Revelog!

When you buy your camera film from us we can ship it across the UK, Europe, USA, New Zealand, Australia and Canada (more countries planned soon!) So buy your Revolog Kolor Film 35mm Colour ISO 200 today and dive back into the fun of 35mm film photography!

Revolog Kolor Film 35mm is an exciting film to use because it's so random and unexpected. The added colour effects imbue the photographs with added depth and emotion. Works particularly well on Landscape shots. 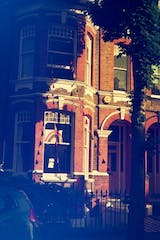 I refuse to get myself another film camera that doesn’t pour light into my film. A good crafts man never blames their tools. But I had a great time with this film, it’s very forgiving of my circumstances and would happily recommend it to people who are into experimental images. Works well for street and landscapes on a sunny day.

This film has so many rich rainbow colours...when it works. Some rolls seem better than others, and that’s just part of the fun of it I suppose. I’ve shot 2 rolls on the same day and one has resulted in beautiful rainbows while the other looks just like regular colour film. It definitely works best outdoors in my experience where there is a lot of sky for the rainbow to really be seen. Because of the price and how unpredictable it is this is not a go-to film of mine, but it really is a fun and exciting one.

This film is great for experiments and for achieving various different colour tones, the only downside is the unpredictability of the film, but that can be part of the fun!

I was really excited to use this film and love the photographs that it has produced, however it can be inconsistent. I would probably say half of the roll had really nice colours and the lighting was great, however the other half looked quite dull almost like there was a dark cast over them. Not something I would not buy often, but a fun film to experiment with!