A film full of psychedelic character: Callisto is the perfect 35mm companion for delivering bright colours onto daily life. Strong greens across the bottom of the frame and rubine red along the top: use to emphasise a grassy or forested foreground or just let your imagination run wild!

To understand more about the details above you can check out our film guide or if you want some inspiration then head over to our page on choosing your next film. And if you want the full details about the film, including technical information, read about Yodica Atlas over on EMULSIVE.

Yodica is a brand new film company, started by a couple with a fantastic passion for film photography, art, and creativity. Inspired by astronomy, they have 7 films available already with big plans for the future!

When you buy your camera film from us we can ship it across the UK, Europe, USA, New Zealand, Australia and Canada (more countries planned soon!) So buy your Yodica Callisto Film 35mm Colour ISO 400 today and dive back into the fun of 35mm film photography!

I adore the shots I got from this film. They were taken on a really bright day so instead of the very bold hues in the promo photos what I got back were really heightened pinks and greens in the image, almost like an old Hollywood film shot “in glorious technicolour”. Some of the shots I took upside down to invert the pink/green since I was shooting pink cherry trees and green grass, and all of them came out bloomin’ lovely. 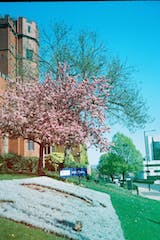 Having used many of these pre-exposed colour films, this is the 1st one which has given me results straight away without any post processing. However the colours were not as vivid as the promotional photographs. The colour effect was consistent across the film, but as I shot this film on a Lomo Diana 35mm I had hoped for exposed sprockets, but Yodica only exposed the traditional size of a 35mm negative. Overall I was pleased that this pre-exposed film actually gave me some colours.

This film gave varying degrees of colour depending on light...the green and pink were much more vivid in shade, indoors and on cloudy days. Blue skies ranged from a subtle pale pink to a more vivid cerise and violet. The green section of the film produced green blue sea, and just the lightest wash of green (slightly yellow?) on bright sunny days.
I loved this film and can't wait to try it again.