How to Store Photographic Film

How to store film can be a bit of a hot button topic amongst the film community. In this blog post we aim to put all your storage conundrums to rest. Keep reading to find out how to keep your film safe and ready for whenever you feel like grabbing your camera. Be warned of some serious film envy throughout as we look through how other members of the film community store their film, courtesy of our twitter family!

Always keep your film in a place that’s cool, dark and dry. And for most of us that will be enough! In general, film is pretty tough stuff - and colour, black and white and slide films have a formulation that is more robust than people fear.

It is likely that you only need to worry about storage conditions in greater detail when you’re keeping film for a long period of time, so all you film hoarders out there listen up! And let's go through the trilogy of cool, dark and dry one at a time. 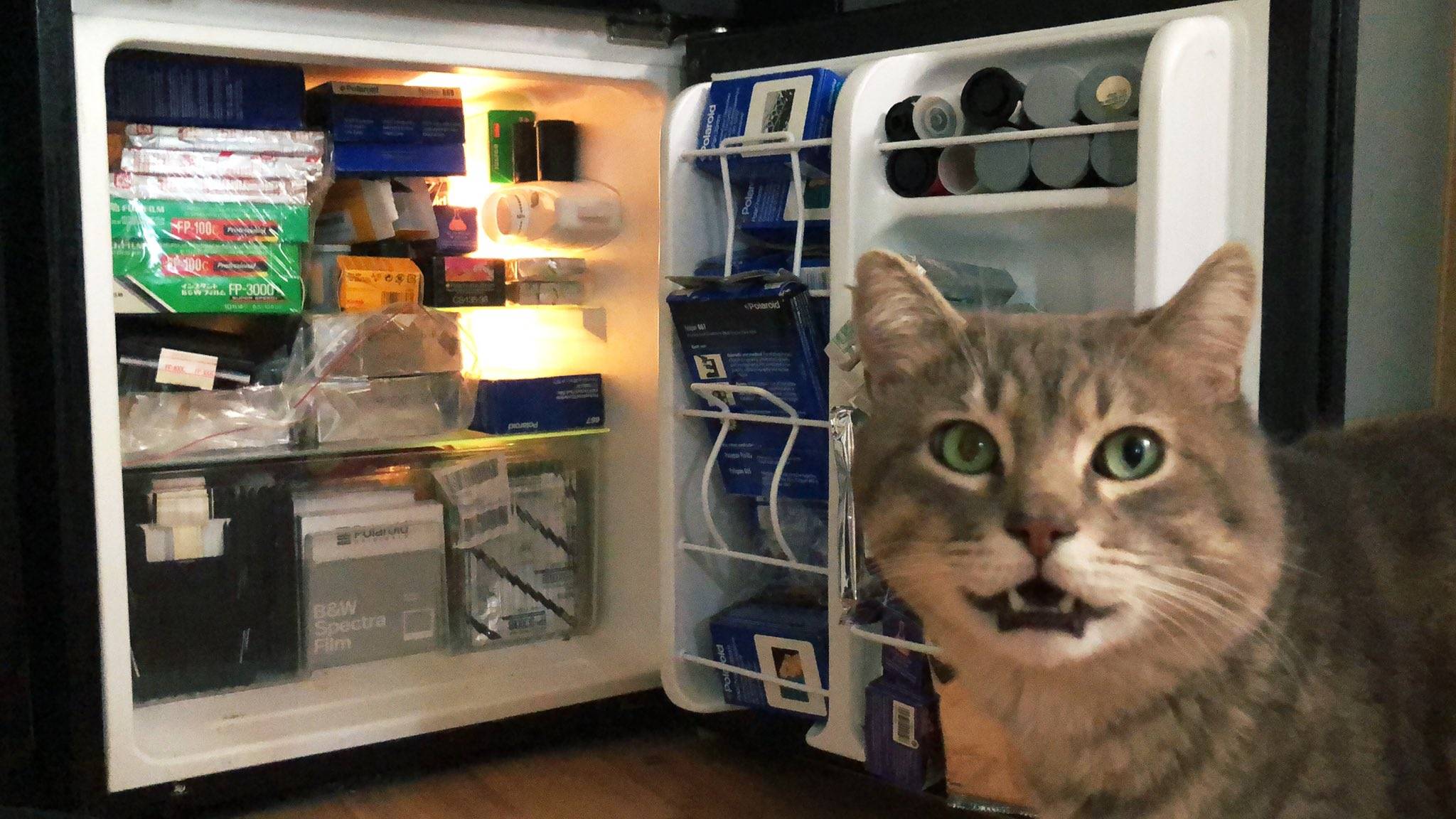 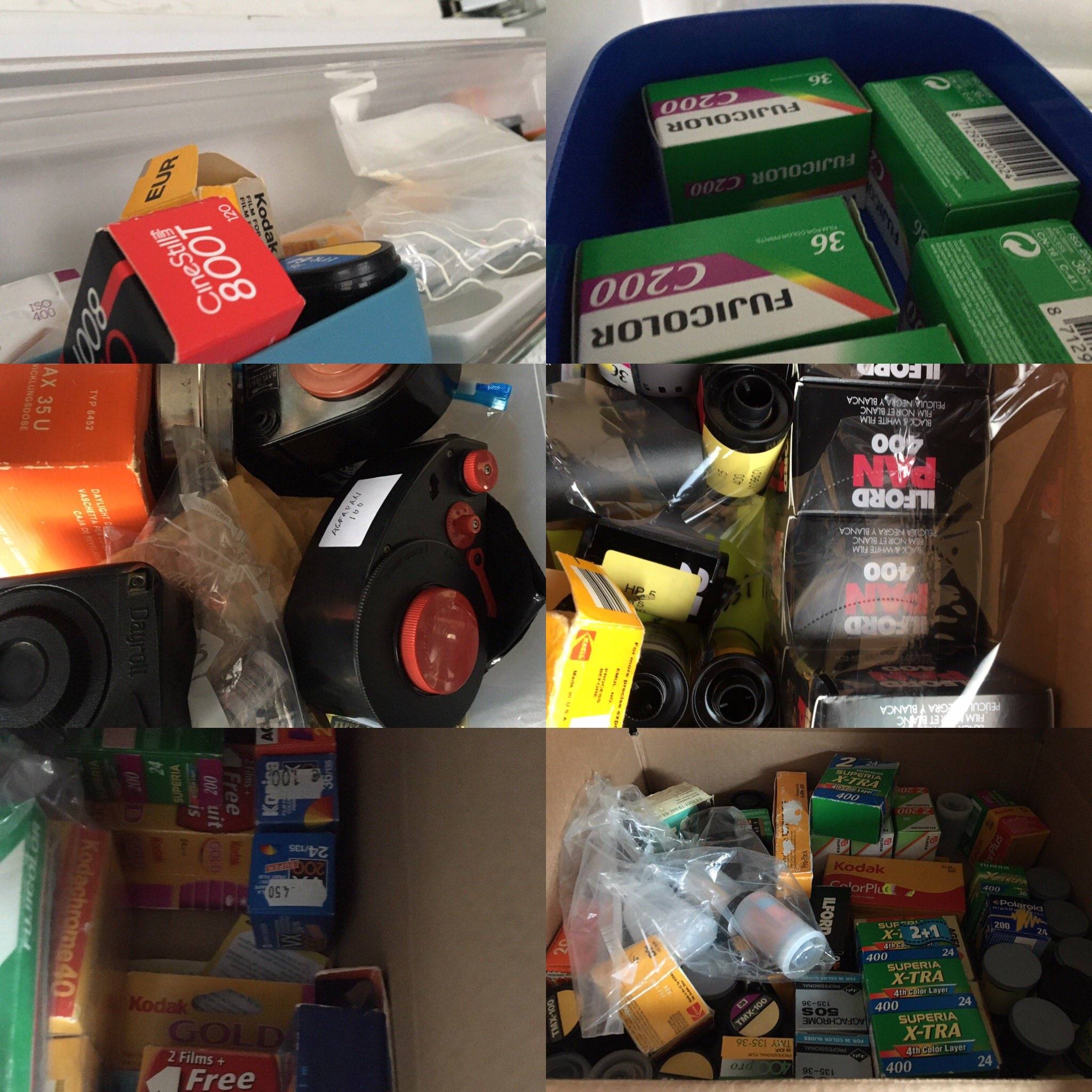 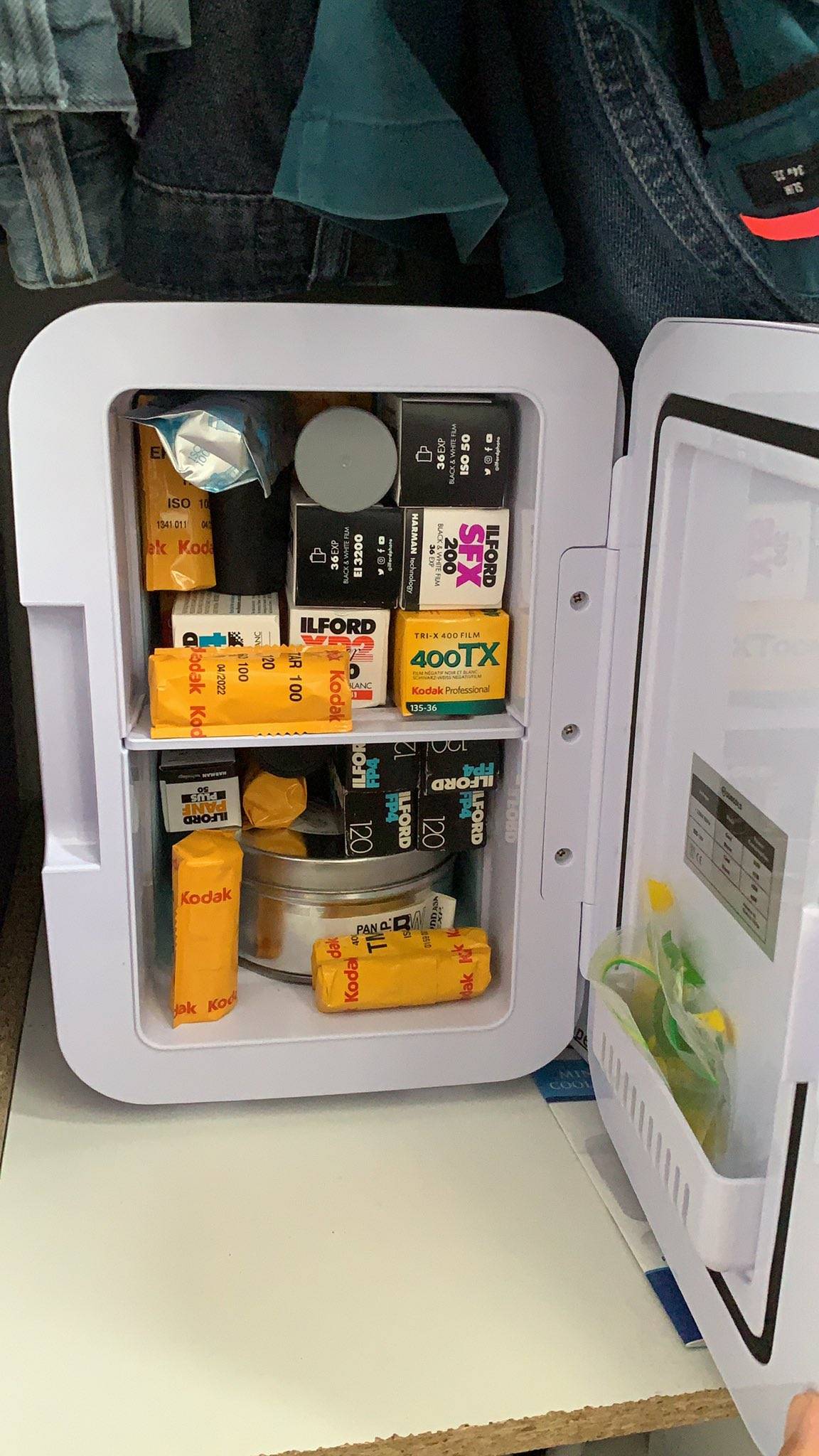 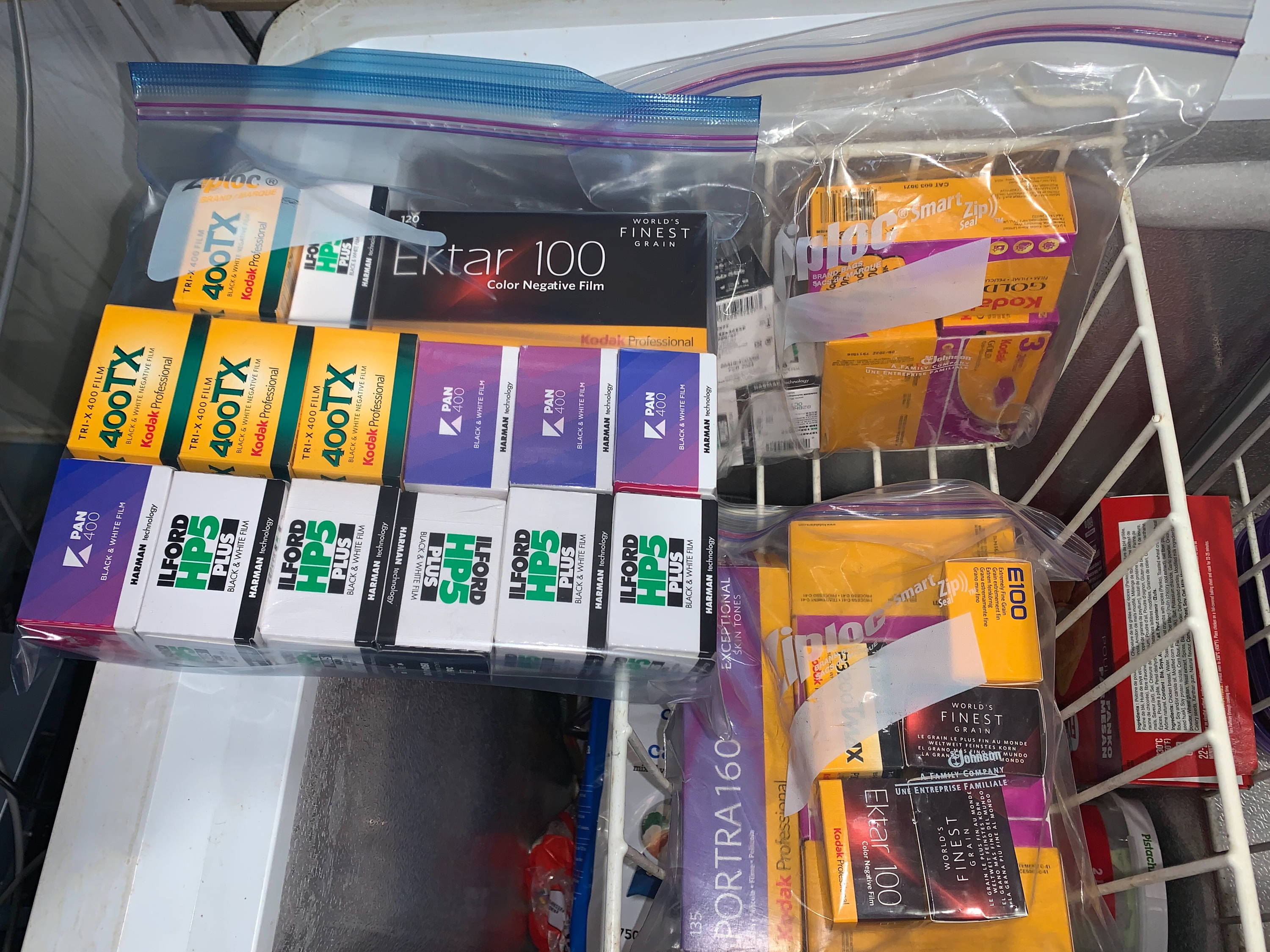 Exposure to heat can damage the emulsion on your film. The specifics of temperatures for different films are as follows…

It is not necessary to store films in the fridge, as long as where you're storing them is of a cool enough temperature. However some people prefer to, and feel it keeps their films fresher for longer.

It is worth noting that if you’re storing films in the fridge make sure you allow them to come back up to room temperature before loading or shooting. This reduces the risk of the backing plastic cracking or warping.

The one exception to this rule would be Kodak Pro Image. This film was formulated and designed for predominantly Asian and South American markets, which of course have hotter climates. It is unique in that it can be stored safely at room temperatures for long periods of time, including hot and humid climates, see our video all about it below. 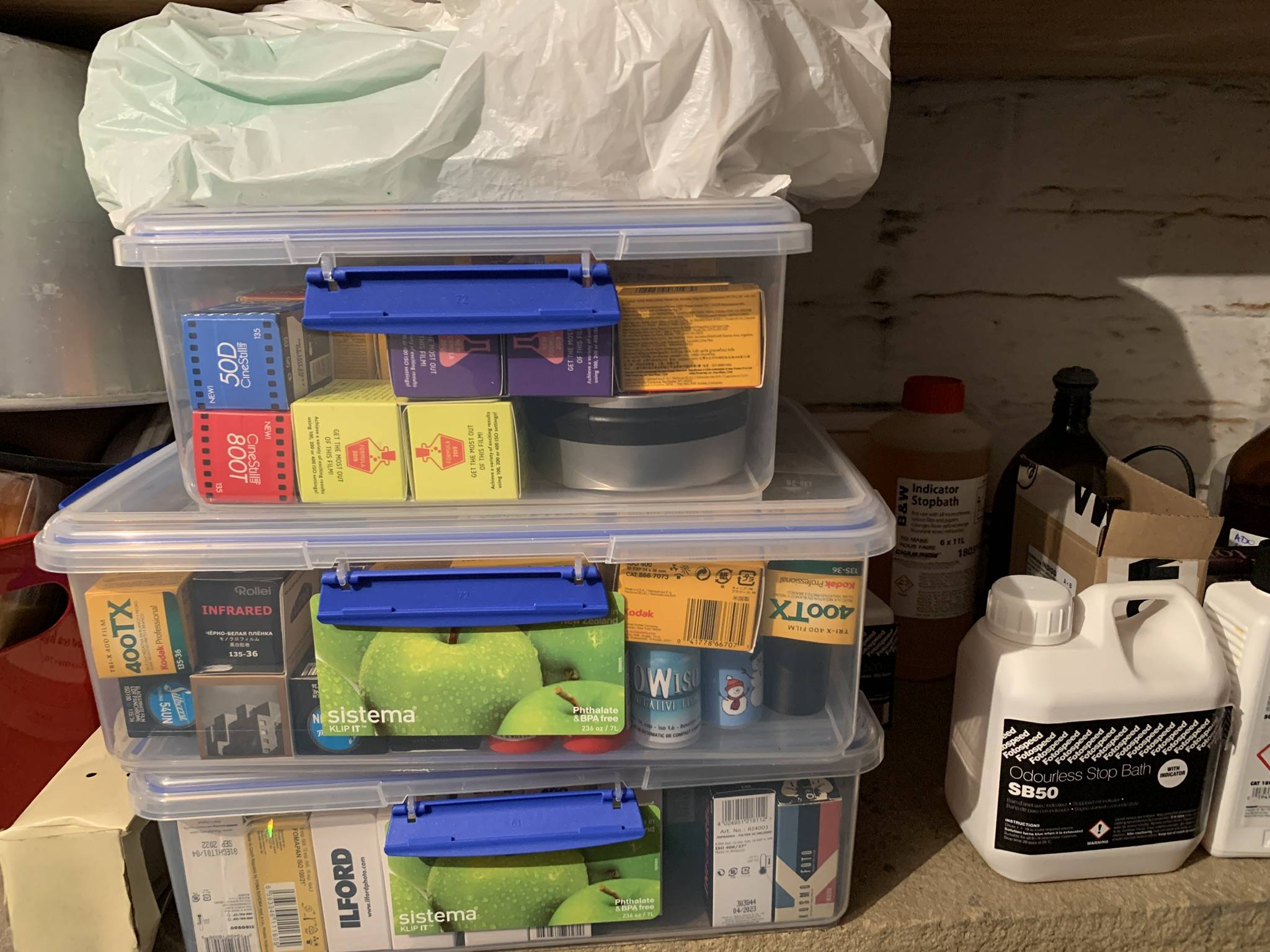 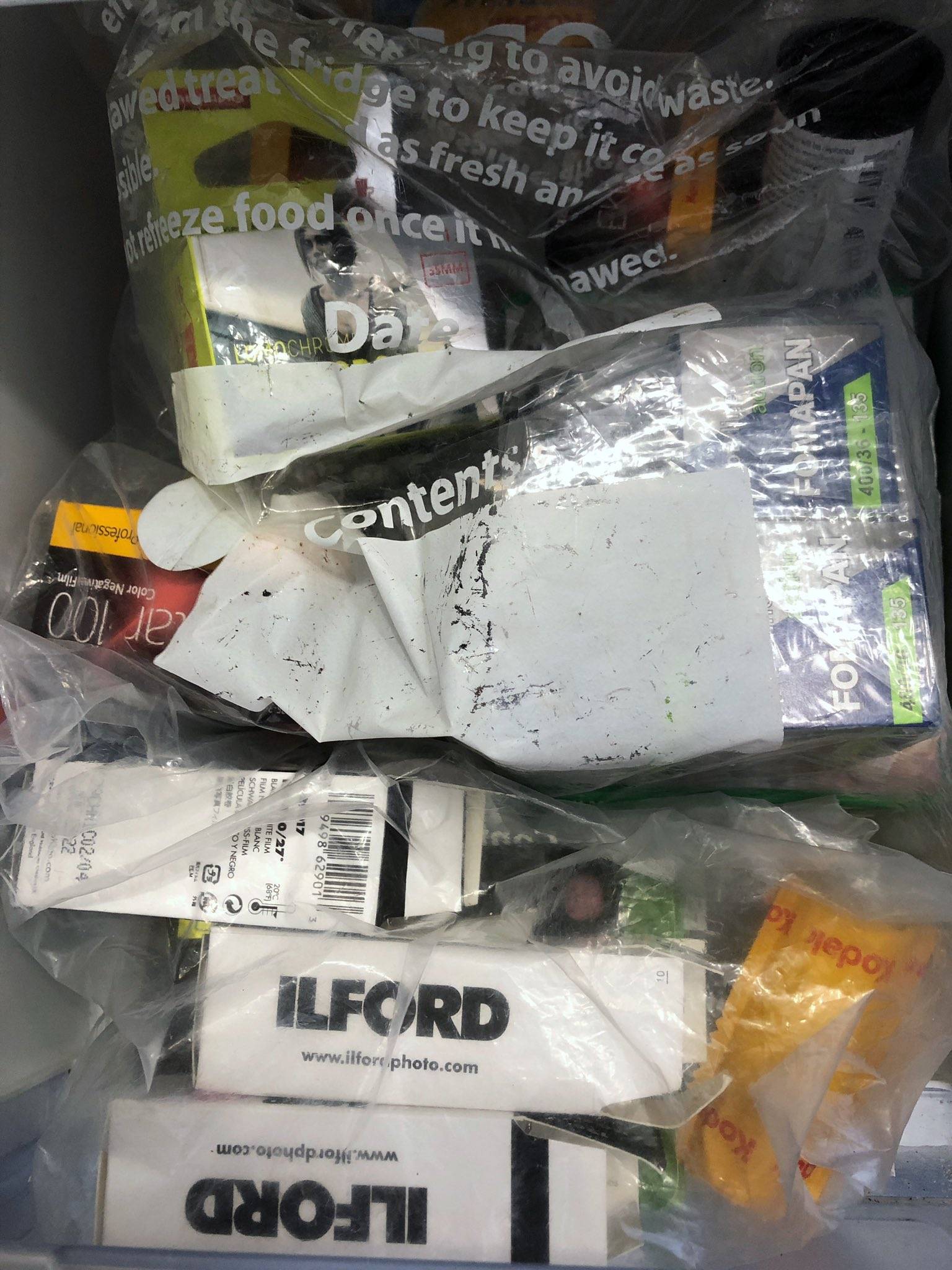 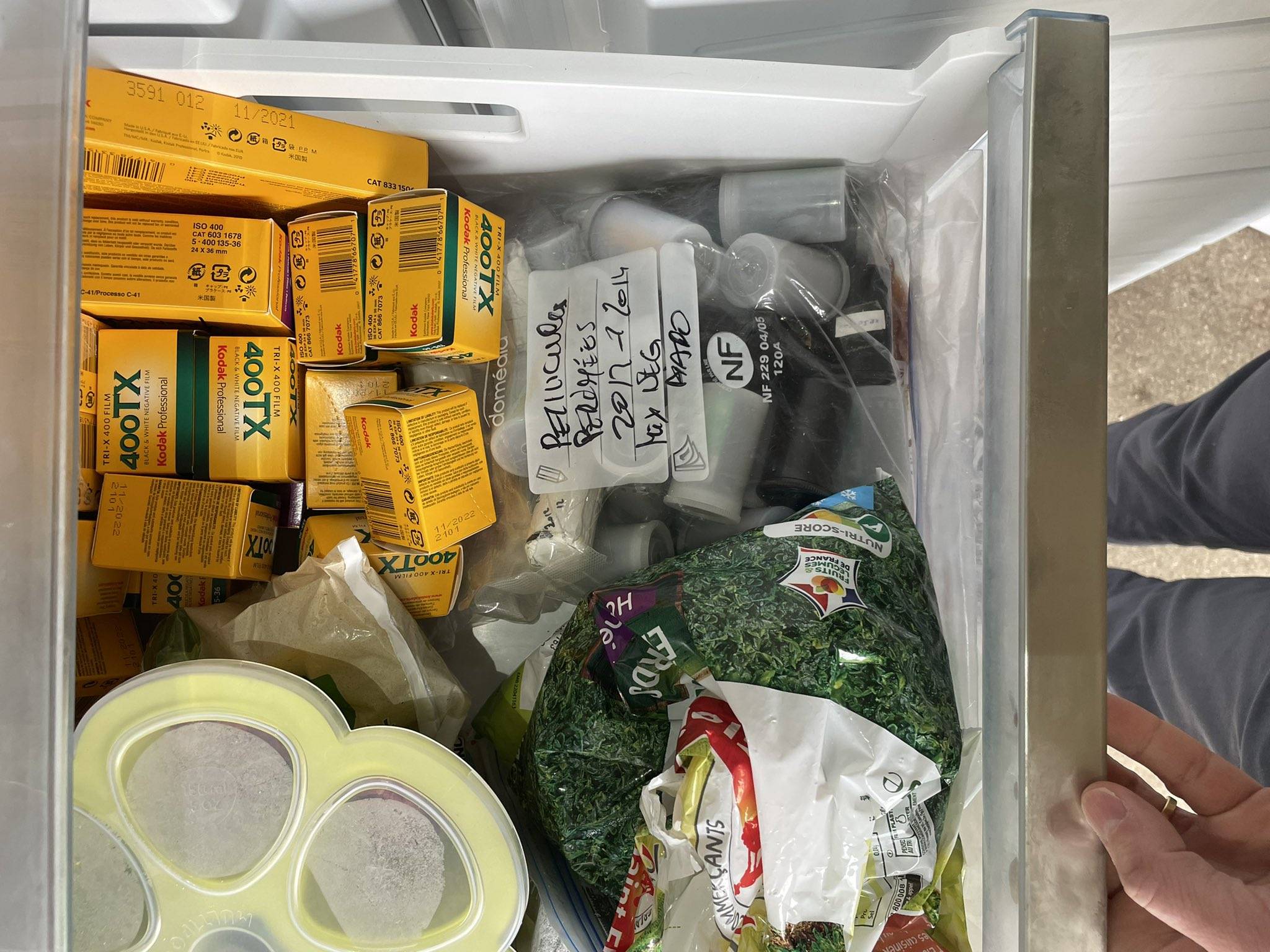 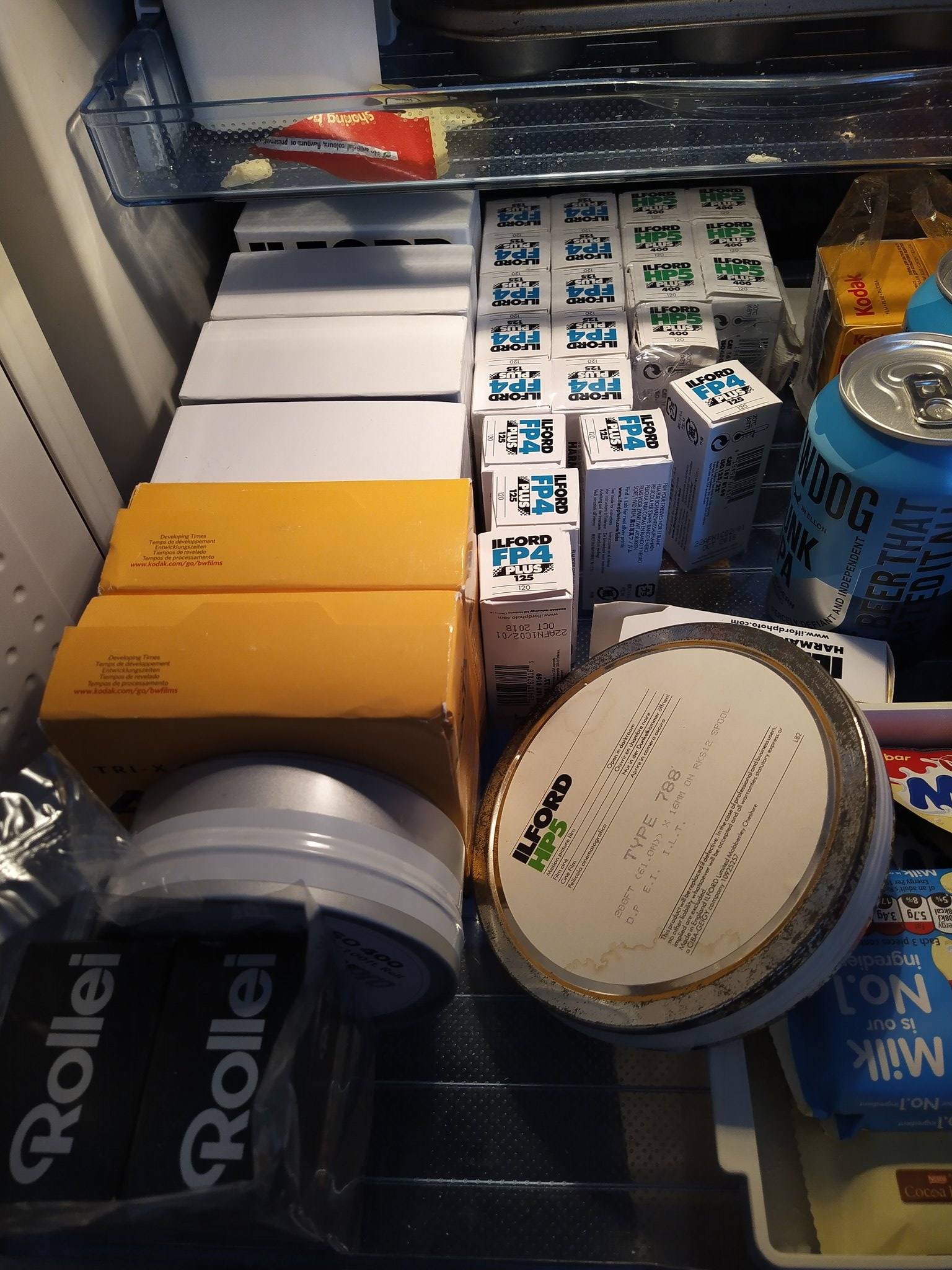 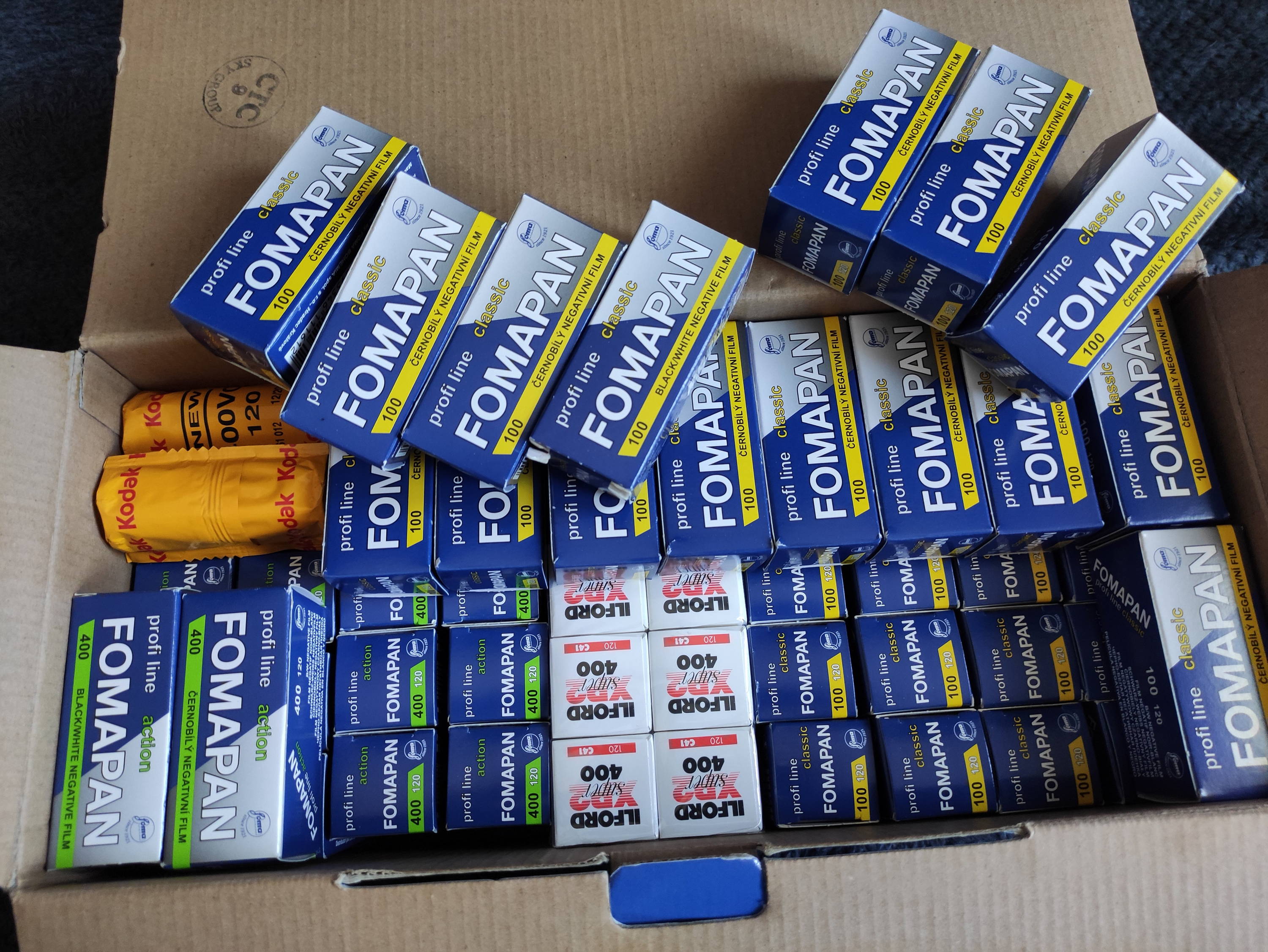 Keep your film in a DARK place

Fun fact for you… did you know that the word photograph has Greek origins, φῶς (phos), meaning "light," and γραφή (graphê), meaning “drawing”? So put that together and you get "drawing with light” or "light drawing"! And, as we all know film is light sensitive, which is great and how we get our lovely exposed negatives. But you don’t want this happening by accident.

So, if ever you find yourself hesitating about storing your film on a bright and sunny window sill or in a dark spot that is also conveniently cool and dry, just think… what would the Greeks do? Remember CDD!! 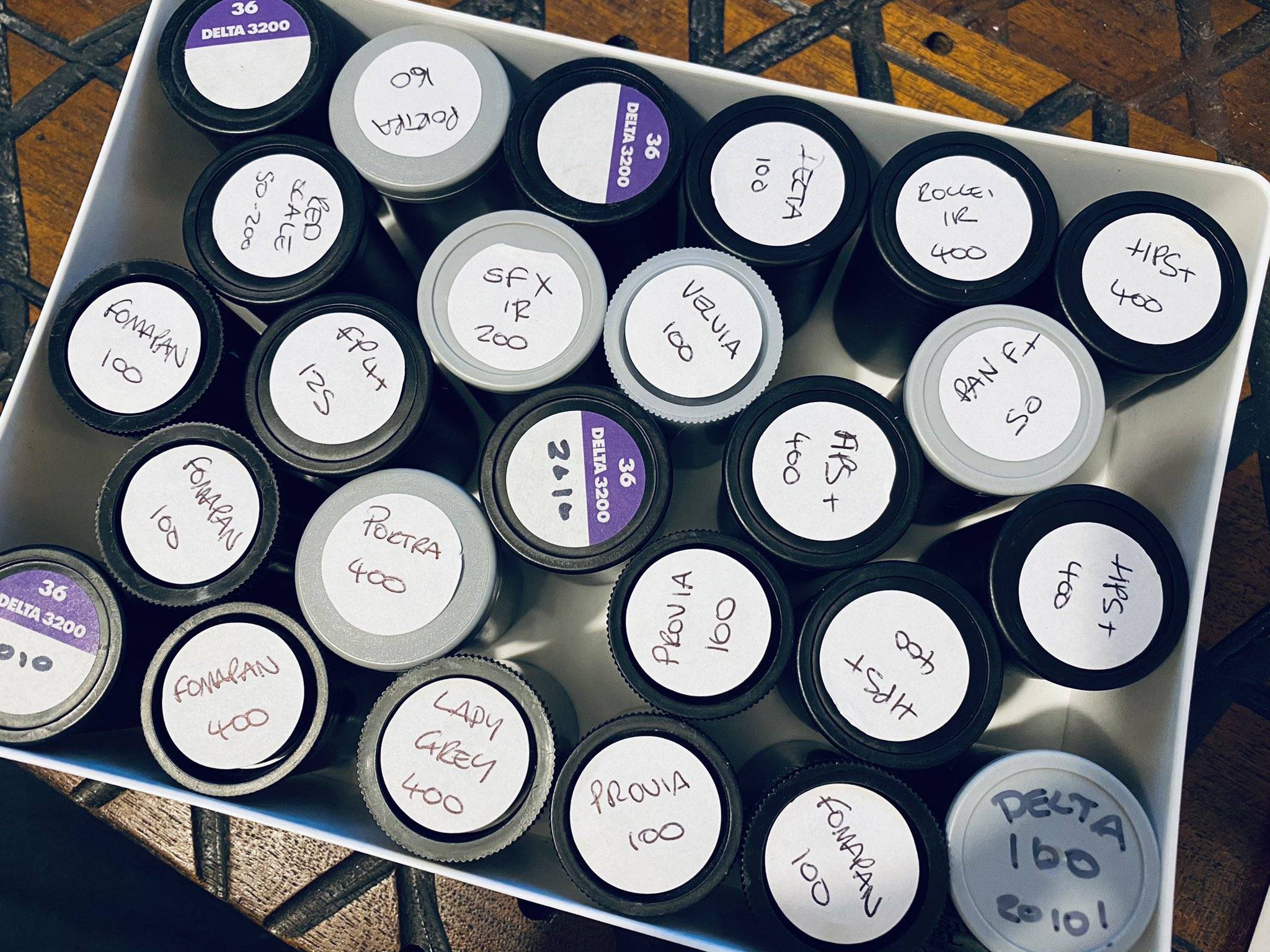 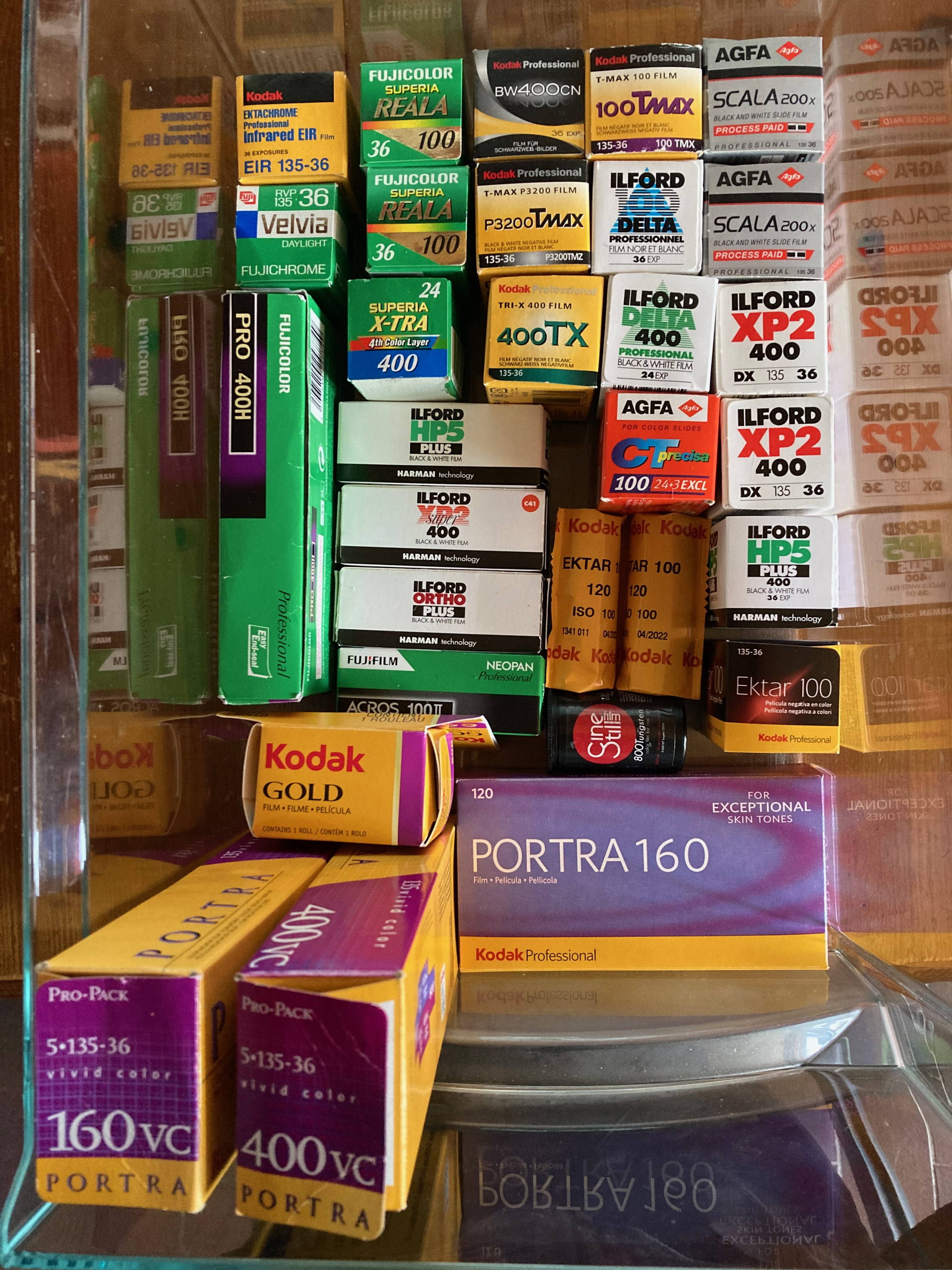 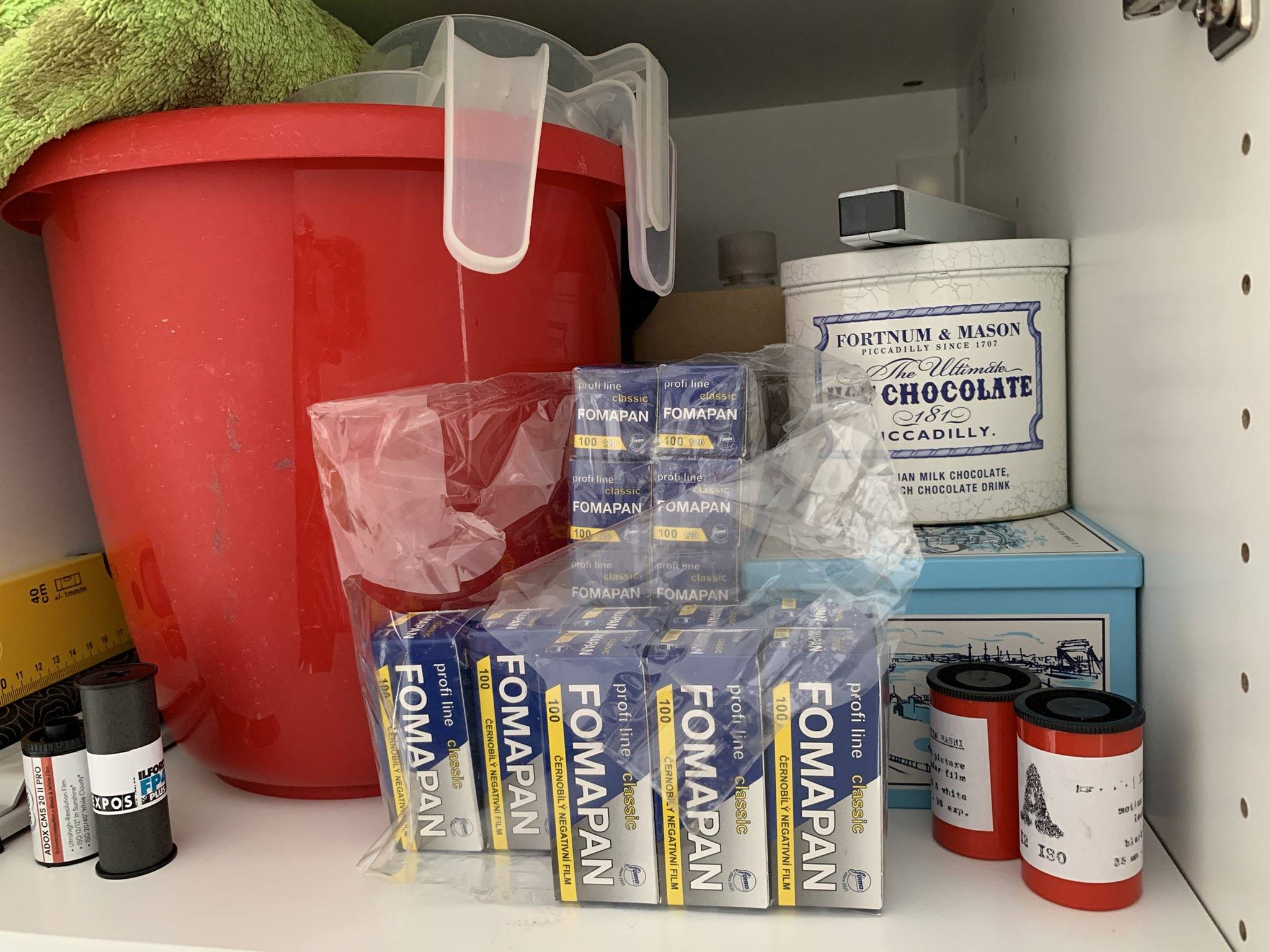 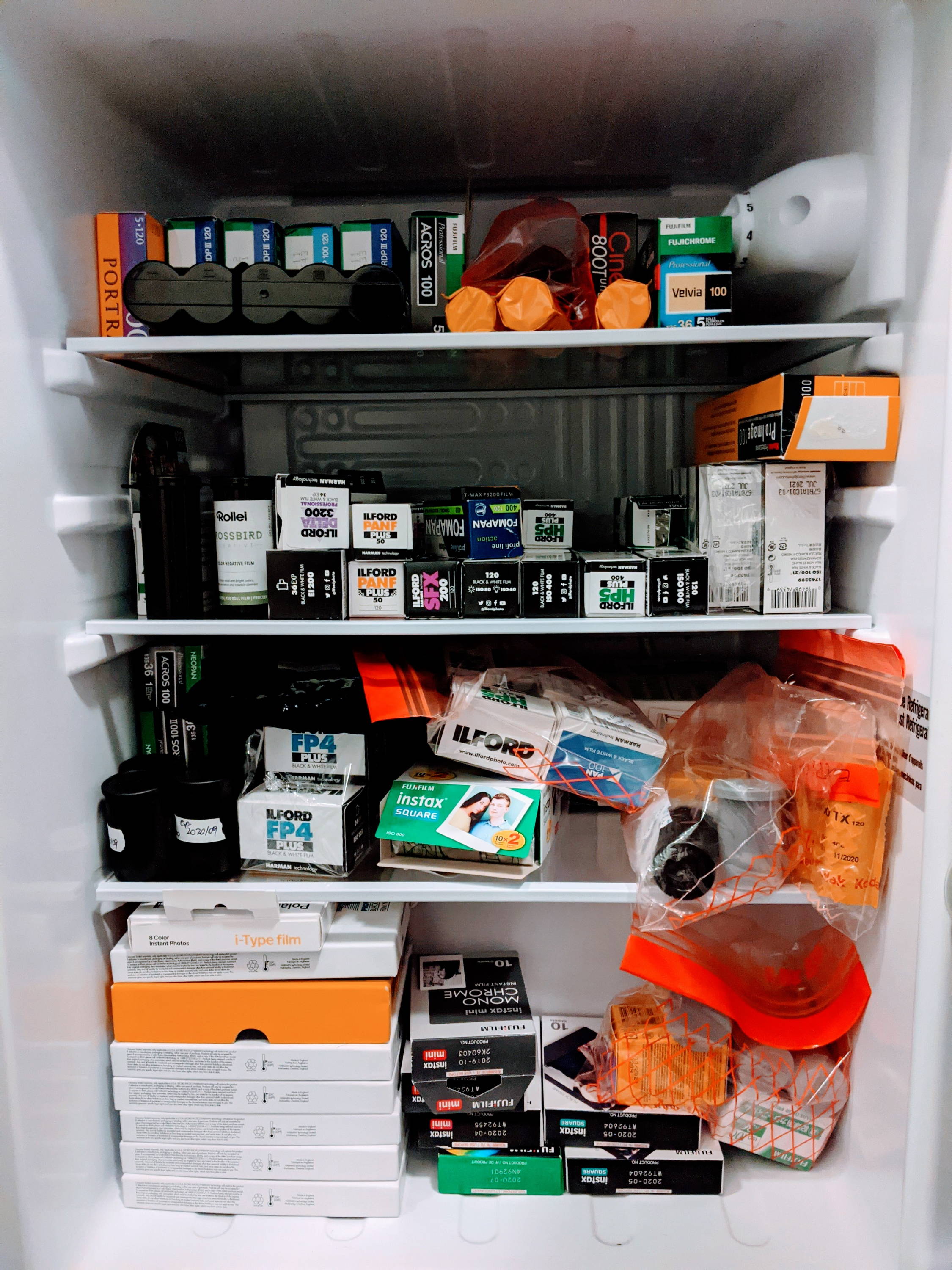 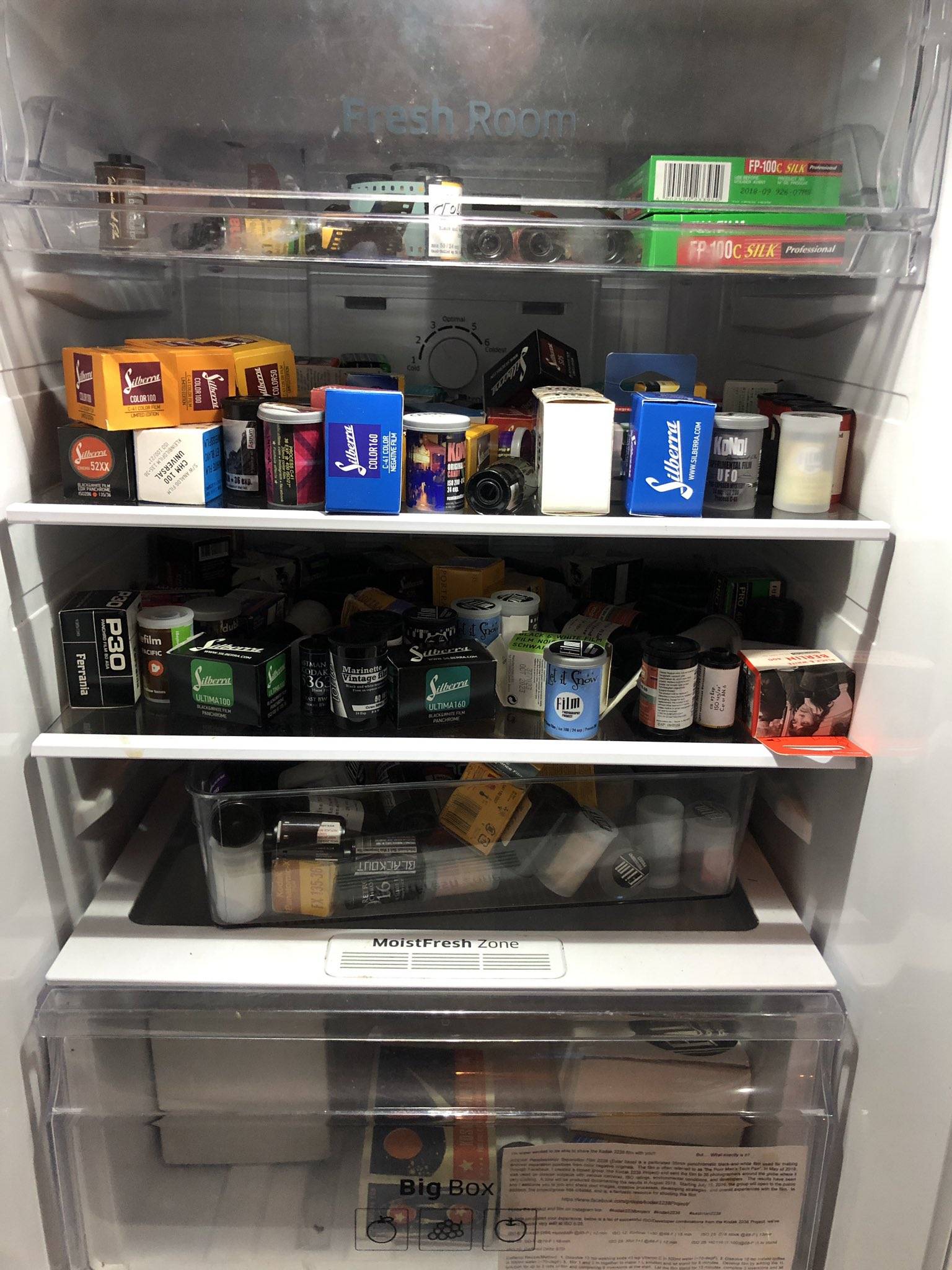 No one likes a soggy negative, unless it’s soggy with development chemistry that is. It is important to keep your film safe and dry to prevent it sticking together in the canister and to protect your camera!

This is true before, during and after shooting the roll.

Note that there are some experimental folks out there who may be partial to a process called ‘film souping’. This involves soaking your film in all manner of things from tea to lemon juice, in the hopes that it will stain or give a quirky look to your images, a bit like expired film. You can do it either before or after you shoot your roll of film (If before, it is very important that you dry out your film fully first. Some people leave it for months before daring putting the roll back into their camera.)

This is the only instance that we could ‘advise’ getting your film wet. See more about film souping here and here. 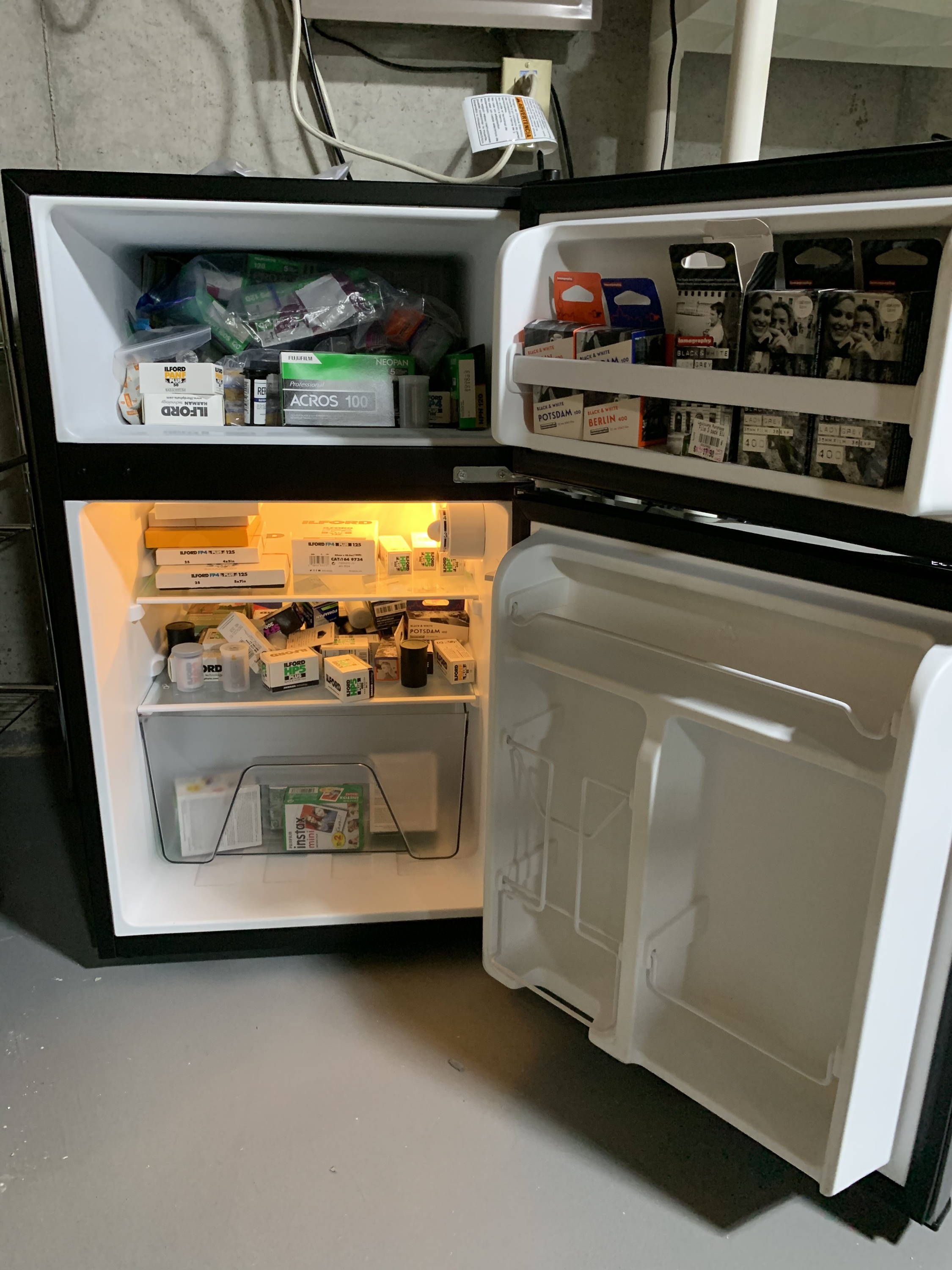 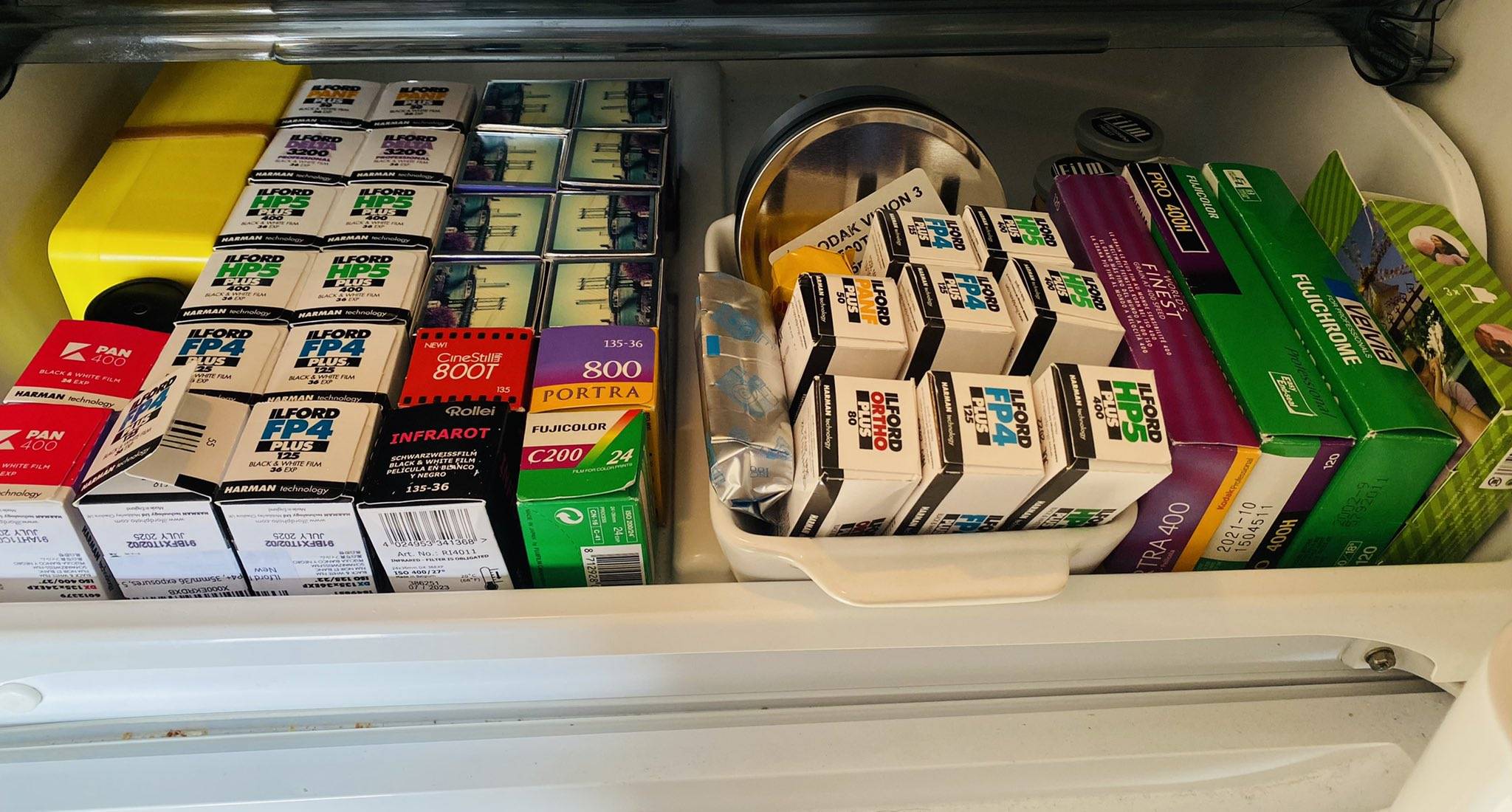 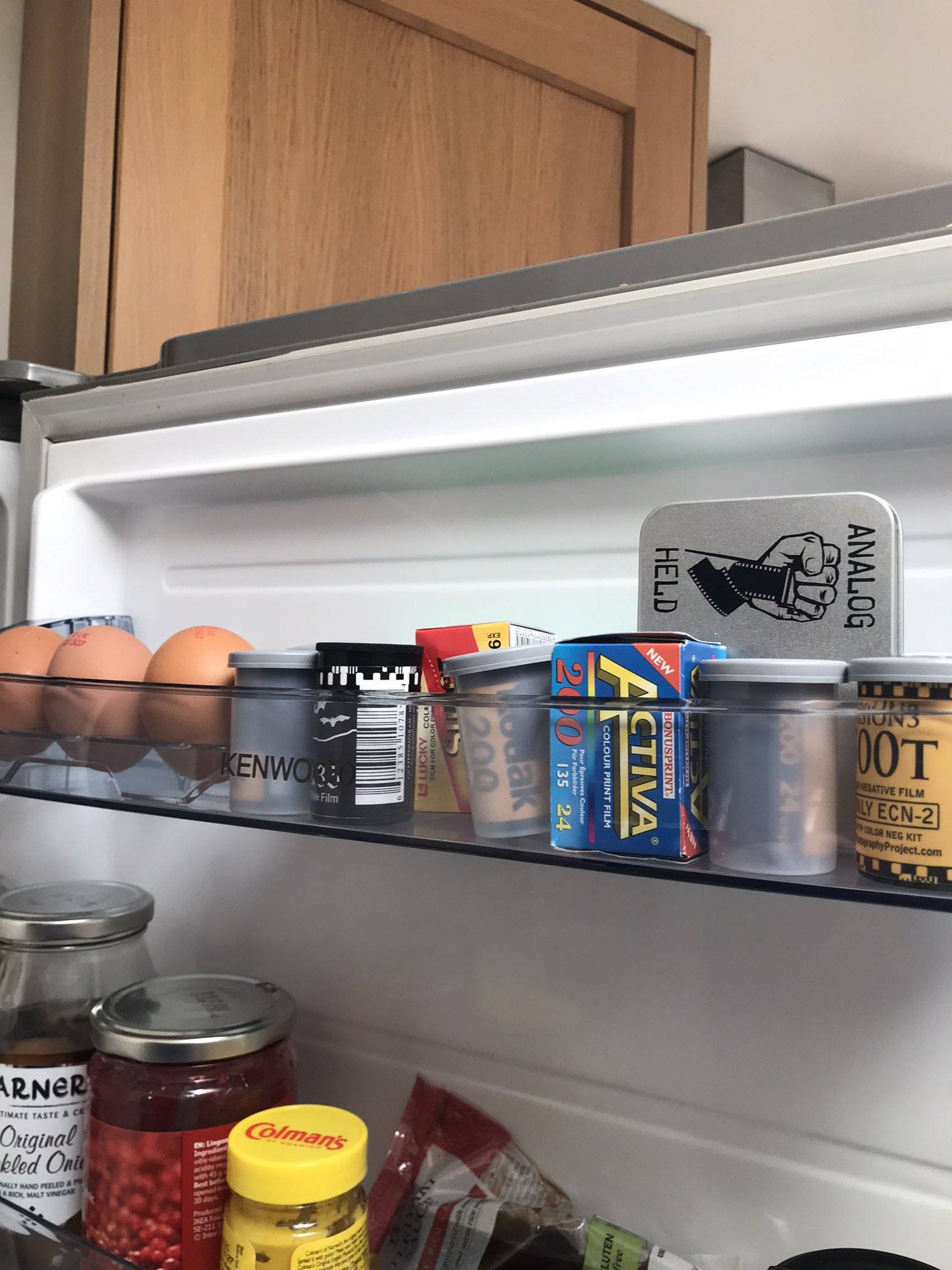 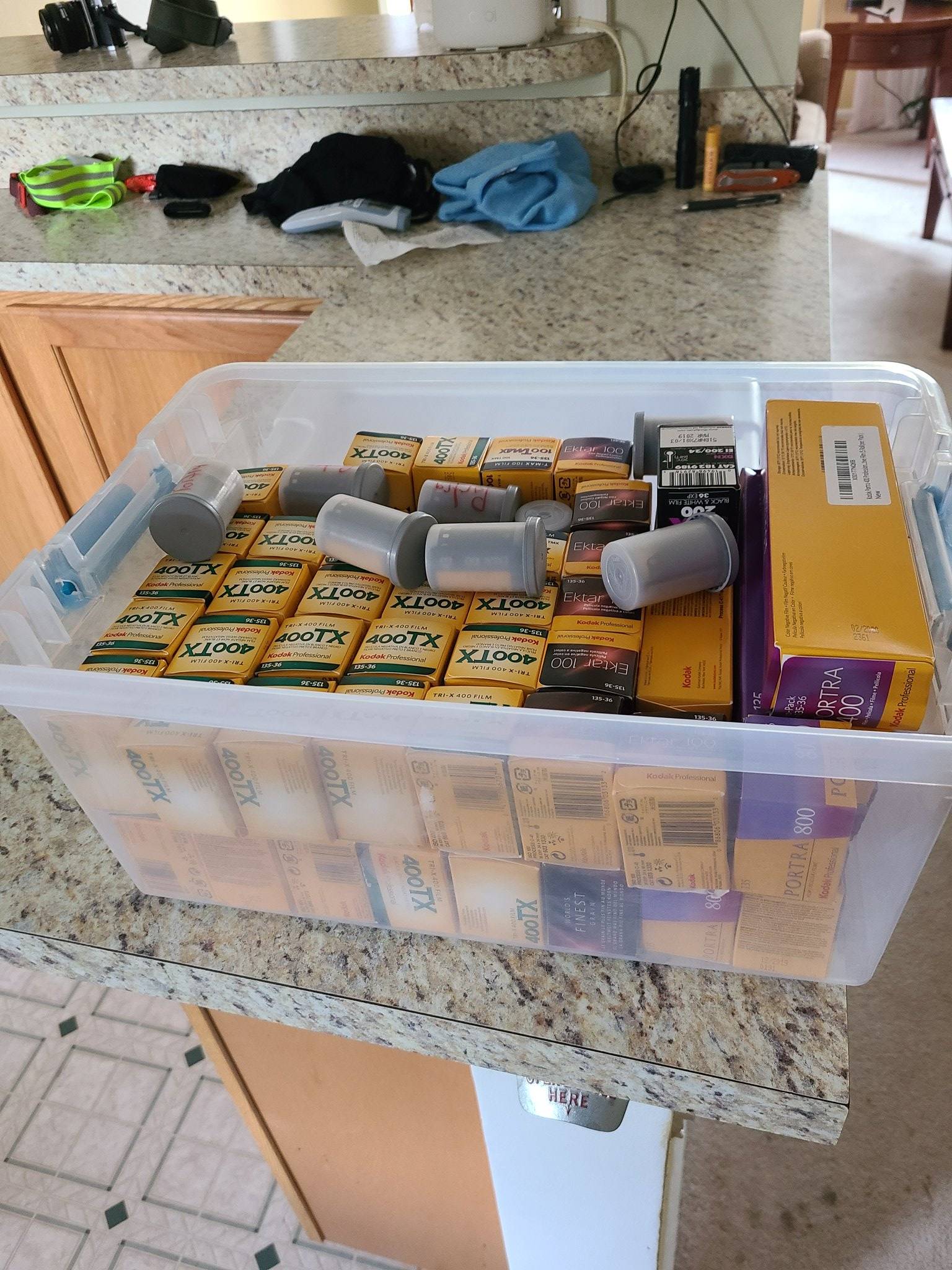 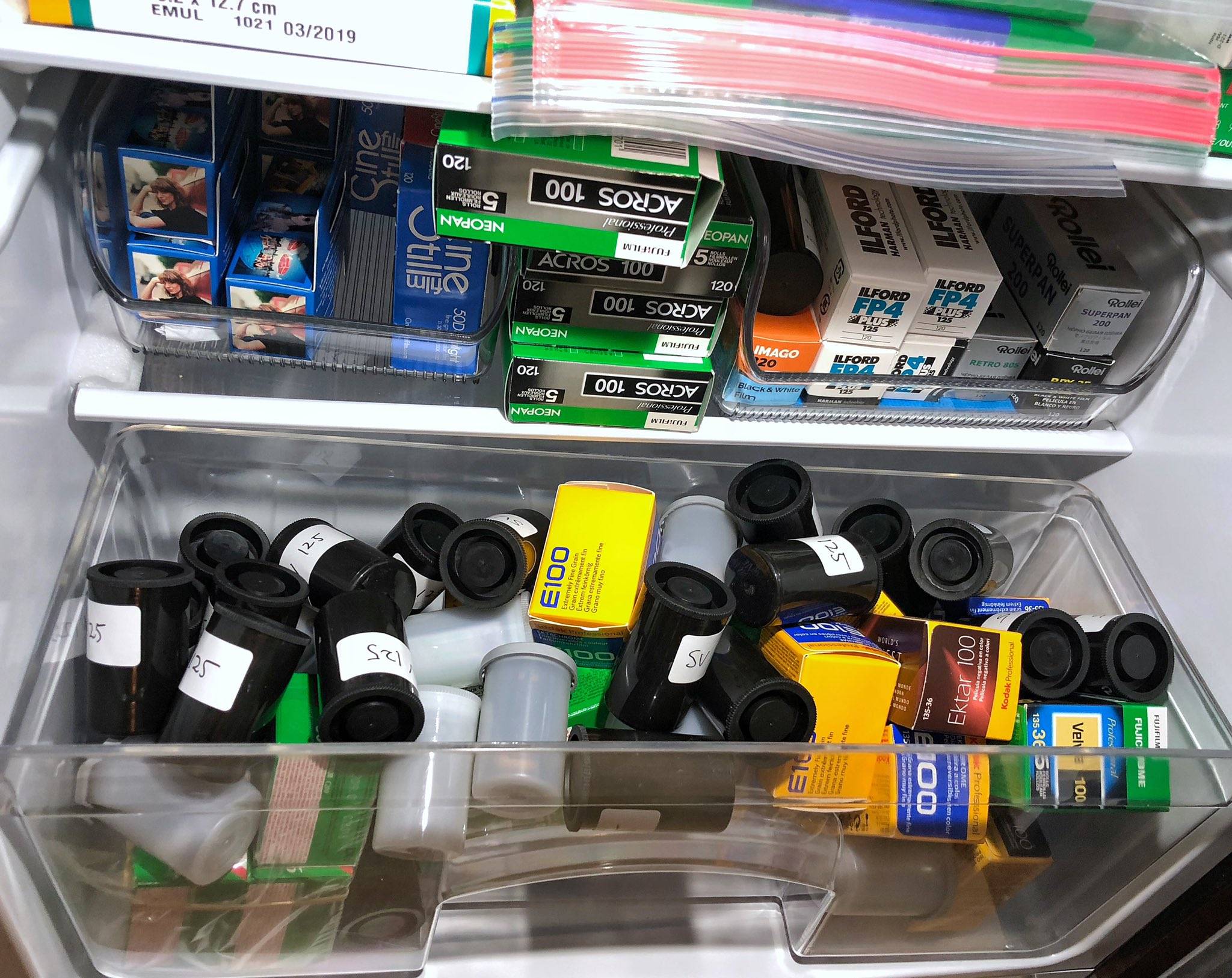 Storing film on the go

Keep your film COOL (okay maybe not physically cool but you will certainly look the part!) DARK and DRY with a film case, perfect for travelling with too.

We couldn’t end this article without some links to some of the lovely film cases we supply. It can be a nuisance to carry round films in all their boxes, wrappers and packaging, a film case solves all that.

Whether you have a big photoshoot planned or are simply going on a wander with your camera, keep your film safe (and fashionable) on the move with these practical and trendy travel solutions!

Hear it from the film experts!

When Paul sat down for some film pub chat with Jon Mided back in December 2019 (see previous blog posts here: The Massive Dev Chart: The Interview and The Philosophy of Film), he left us with lots of gems of information when it comes to storing film. Paul and Jon were also later joined by (a slightly star struck) Pierro Pozella of PPP cameras. It was reassuring to know that even these experts had queries on how to best store their film, so rest assured you aren’t alone!

Pierro raised the point that a lot of people in the film community are concerned about how to store film properly, especially old film. And Jon shared his wisdom on the issue, starting with the importance of businesses, like Analogue Wonderland, storing film properly so that our wonderful customers get their film in the best condition possible for shooting. However, as individuals we don’t necessarily need to be as cautious.

If you were to perhaps accidentally leave your film somewhere that was a little too warm, or on a sunny windowsill by mistake, the chances are that it will still be absolutely fine. You may get some slight fogging, a loss of contrast or some discolouring but you will definitely get an image.

Another factor to consider is the expiry date. In reality these should be seen as guidelines of when the film will perform at its absolute best. It certainly doesn’t mean that the film is unusable once it has expired, in fact some people buy expired film specifically for the unpredictable results. So you should think of expiry date as 'best before' rather than 'unsuable after'.

Jon told us about a roll of tri-x that he has left in his bulk loader from back in his student days... "And I've still got part of a reel of Tri-X in a bulk loader that's ancient. And it's been in there for years. And I know I'll get something out of it." So if you do have old film at home, it is still worth trying. It may be a bit flat or foggy but sometimes expired film can offer really interesting effects and people buy expired film specifically for this reason: unpredictable and unique results.

Paul also gave the example of a friend he had at uni who used to laugh at expiry dates on eggs because she lived on her family run farm. Like with everything, there are so many factors to consider- stored on a window in the sun, the egg lasts less than a day but if you put it in the fridge it will still be fine three weeks later! So which date have they picked and why?

And of course people understandably like expiry dates because they want reliability. But on the other extreme, some people pay a premium for expired film. It’s the beautiful thing about film- it doesn't matter! What is an expiry date? It is there for the look that someone designed a film for. But actually, if someone has a real love for CineStill 800T that’s a few years old and has been left in the sun, then that’s great too!

Shooting expired film is fun and can often produce unique and unpredictable results. Pictured above is one of the expired coloured films we sell: Fukkatsu 110 film black and white film. It technically expired 12/2018 but thanks to cold-storage has retained its gorgeous black and white appeal. Customers describe it as offering high contrast and lots of grain.

The times when film does become unusable is when it is exposed to extreme conditions. Jon spoke to us about what to watch out for when storing film.

He gave the example of a bulk roll of Tri-x he brought around 2015, that is still completely fresh and perfect to use because it was stored correctly, Jon makes sure he avoids high temperatures- COOL, DARK and DRY!

The responsibility to store film properly runs down the whole supply chain so that the final customer has the freshest film possible to use. Jon told us of some of the transportation mishaps he has experienced whilst working in the film industry. In the US, a lot of the film is transported via ground transport such as UPS trucks, and these trucks can be left out in the middle of the desert between stops, or perhaps there's a heater in the truck that could rest against the film. On one occasion Jon had reports to him of many faulty films, seemingly a whole batch that weren't producing the images they should have, but the rest of the film seemed fine. After some investigation work Jon found that one box of film had been left in a UPS truck for far too long, and exposed to some extreme heat. So of course this film was damaged, but as a customer there wasn't anything visible and it would be hard to tell until the film was actually shot.

Don't worry though, I am sure this is a rare occurrence!

At Analogue Wonderland we package your order in boxes with warnings on them about exposing the products to heat or x-rays, and in three years we've not had a single issue - in the UK or heading overseas - where a courier has damaged the film through heat, damp or light.

Just make sure you store them properly in your home, on the final stop of the journey to fantastic film photography! 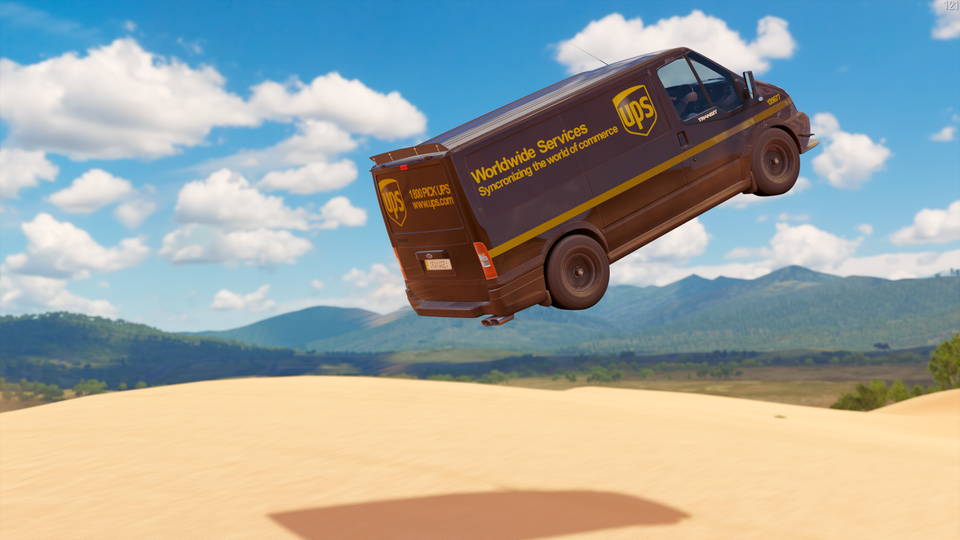 There is a lot of misinformation flying around, so Jon’s story and experiences with expired film were reassuring to hear. We hope this blog has put your film storage worries at ease, and that you have felt inspired by the amazing film hoards in the community. We'd say unless you’re storing your film in a hot truck in the middle of a dessert, or keeping it for years after expiry date, then as long as you're being sensible you have little to worry about!