Check out our Halloween deals here 👻

The optimum creative tool, this medium format film can be shot in two different ways. First - as a straight black and white film ISO 400, with a slight ghostly result due to the infrared sensitivity. Alternatively you pair it with a deep red filter to disproportionately focus on the IR spectrum!

Trees will be bright white, people will glow, the sky will be dark black, and you will be rewarded with some of the most dramatic images straight out of the camera. Note that this will increase the necessary exposure significantly (it will respond at sensitivity of ~ISO 12-25)

To understand more about the details above you can check out our film guide or if you want some inspiration then head over to our page on choosing your next film. And if you want the full details about the film, including technical information, read about Rollei Infrared over on EMULSIVE.

When you buy your camera film from us we can ship it across the UK, Europe, USA, New Zealand, Australia and Canada (more countries planned soon!) So buy your Rollei Infrared Film 120 Infrared ISO 400 today and dive back into the fun of 120 film photography!

I've shot Rollei infrared a number of times over the summer, and it really excels when shooting with a R72 filter in bright sunshine. The blues in the sky turn a moody dark tone, whereas green foliage is rendered a bright white. Just remember to compensate for the 4-5 stops of light lost through the heavy IR filter. Oh, and as a bonus, I also found Rollei infrared to be a really solid standard b&w emulsion when not shooting with the R72 filter. It's a really versatile film for the summer months & I already look forward to shooting more of it. 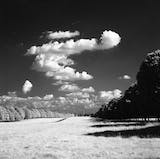 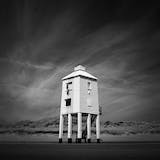 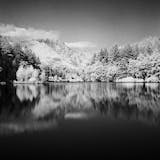 Slapped a red filter onto my Holga and took it out for a day. Came back with some striking shots of famous architecture and a few great portraits. I'd never used infared film before and just wanted to have a go with it. Just be sure to shoot in plenty of light - despite the ISO shooting into shadows won't render much of an image. 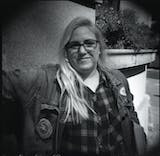 This is the first time I've shot with this film in 120 format. I've shot one roll in 35mm previously. This time I visited the Roaches, practically on my doorstep near where I live. Armed with my Mamiya C33 and an infrared filter on the front. I wanted to shoot one of the abandoned buildings I knew of there. The film in 35mm didn't disappoint and neither did this roll of 120. With the infrared filter fitted I exposed this roll of 400 ISO film at 25. I'm happy with the results. My Mamiya lens doesn't have an infrared mark to aid focusing so I shot these at 1/30 around f11/f16 to give me enough depth of field to cover it. The grain on this film is very low with a pleasing range of tones. I have another roll of this film already and I think my next trip out with it will be to shoot it as a regular black and white film.
If you're looking to try infrared photography this is lovely film and much cheaper than Ilford's. Once you're confident with your exposure you should get some eye catching results. 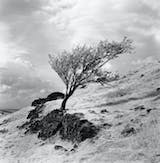 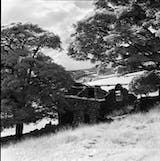 I bought the 120 of this film to shoot in my Ondu pinhole, and it was an experience.

This is a multi-functional film, as it can be shoot as IR of just a standard B&W film. As B&W it works fine not to much grain and reciprocity fail isn't to bad, I used t^1.31 for IR its a different story.

Shooting in IR, I used a Cokin 89b filter which losing you around 4-5 stops of light and this is where user error really came to the fore, out of 16 frames I only got a return of 4 and 2 of them were just straight B&W.

I used a light meter set to ISO400 then manually deducted the 5 stops, this was the first mistake, really I should of set the meter at ISO6-12 and worked out the maths from there, then there was the matter of adding reciprocity failure. As I was working on the assumption of T^1.31 a 51second exposure was around 2minutes 50s but this was way to short, as I later found on this film's reciprocity failure is T^1.52 which would give a time of 6 minutes 30s. and this is why most frames were under-exposured.

Like I said this was all user error and nothing to do with the film.

I think that maybe this isn't the best film to shot in a pinhole camera, I still have 1 roll left which I will probably shoot as B&W in one of my other 120 cameras.

I hope that review, showing my mistakes will help others who wish to shoot Rollei IR in pinhole cameras.

I meant to include this shot from my film from 37 years ago. It's a great film to experiment with as in this portrait of my nephew where his skin looks very waxy. 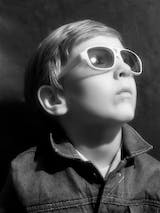