﻿Note that some of our rolls are being sold without boxes. These films are still fresh and come in the secure plastic canister.

A reliable and good-looking black and white 35mm film, this emulsion will suit most shooting situations and consistently deliver images with great detail quality and retro look.

When you buy your camera film from us we can ship it across the UK, Europe, USA, New Zealand, Australia and Canada (more countries planned soon!) So buy your Rollei Retro 400S Film 35mm B&W ISO 400 today and dive back into the fun of 35mm film photography!

I have been really impressed with Rollei Retro 400s 120 in my Mamiya 645 1000s. I think the first surprise was when i tipped the developer out in the sink, it was a dark brown colour but fear not this is normal.The film was processed in Hydrofen with directions from the massive dev chart. It dried without much curl to the film and there a good range of contrast on the negative. I used silverfast to scan but there was no profile to select from the menu for this film. I was really impressed with all of the tones of the negatives and both shadows and highlights this gives you some adjustment headroom lightroom if you find you have haven't been that accurate with your exposure. The grain is there and looks great but it never tries to take over the picture more of a gentle reminder you are still shooting on film.It is well priced and will probably become my go to film for most situations where i will use black and white film. 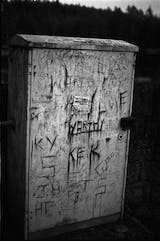 The job in this case, is shooting ice hockey in my local rink.

Tried various other B&W films from several manufacturers, however the Retro 400S was a stand out winner for me, even when considering it is the first time I have ever used it.
The negatives alone looked clear and sharp long before getting a loupe onto them and then hitting the scanner. Sample images below have had the highs & lows tweaked very slightly, along with a crop.
Shooting conditions were not ideal, notionally daylight balanced LED lights (in reality a mixed bag of colours, from cool white to a slightly warmer white), and through scuffed, scratched and gouged plexi glass, even so, the grain was minimal shooting at box speed and fine enough to be able to pick out the shape of the safety netting above the glass in some shots.
It has a fairly good tonal range and handles the brightly lit & reflecting ice well, along with the darker seating areas. Going beyond the rink I'd like to think this film would be suitable for landscape & urban shooting, areas which I'll be shooting it sooner rather than later, maybe at 200 or 320 to see how it responds.

Shot with a Nikon F4S with 70-200 f2.8 Sigma, and taking into consideration my slap-dash development in R09 (1+25) for 10.5 minutes and minimal processing on scanning, it has given me much better images than I'd have hoped for.

The makings of a great all-rounder for me, with nothing that would trip you up in terms of usage, a decent film to take wherever you go. 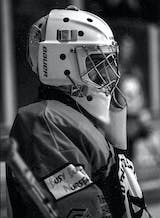 M
Michael Brooks
Sharing with the Film Community: No
Bit of a blank page!

Neither of the two rolls I purchased produced any usable images as both where completely under exposed! Having the first roll fail in my Nikon F80 I tried the second in my Nikon F601 with exactly the same result! Previous and post rolls of various film types both black and white and colour have all been fine in both cameras. In fact I also purchased a roll of KIRO 400 at the same time which I tested in the F80 after the Rollei RETRO and this film processed fine. I do not develop my own films but use a reputable lab that does and in fact specifies that they cover Rollei film as well as the normal Ilford etc
A troll of the internet did find that others have had similar problems with this film in the past.

Gives rather high contast images which can work well given the right subject. Box speed is a tad optimistic; and it can get quite grainy if exposure isn't right.