When used in your 35mm camera the FPP Low ISO B&W film will produce a film negative with very fine grain.

This blue-sensitive* black-and-white film has very high resolution and incorporates a yellow dye, which is removed during processing, to provide very high sharpness.

* Blue Sensitive films need to be shot in daylight or using a flash/strobe. Avoid using a yellow filter or shooting in tungsten (indoor) light.

Home Developing - The recommended developer is FPP D96 (7 minutes at 68 degrees F). This film can also be developed in Standard BW like Kodak D76, HC-110, Ektol and others.

How do I meter for ISO 6? You must dial the asa manually into your camera or use a hand-held meter. Note that you can download the Light Meter App for your phone.

Use your camera's Internal Light Meter. If you camera can't be set to ISO 6, you can dial in ISO 25 and open up your lens by two stops.

When you buy your camera film from us we can ship it across the UK, Europe, USA, New Zealand, Australia and Canada (more countries planned soon!) So buy your FPP Low ISO B&W 35mm Film today and dive back into the fun of 35mm film photography!

This film is ISO Six but I shoot it at ISO 3. The Film is very fine grain and a tripod is recommended. It is not good for Landscapes the greens are too dark, it is good for cloudy weather as it has very high contrast. It is an Orthochromatic film which is why greenery can turn out very dark. I am waiting for my film to return back from the lab and this is my Second roll of film I have Shot. Reds will be very dark on this film. At the moment I am enjoying shooting on very slow Films.

I bough this a couple of months ago on a whim and it's been sitting since waiting for enough light to actually use it. Finally had a chance last weekend, so headed out to the local cemetery and then down to the beach in glorious early afternoon sunshine with my light meter almost off the scale.

Although most of the roll was taken using a tripod I was able to get a few shots hand-held at f/1.7 and around 1/100th shutter speed but expect to use a tripod with this stuff! An unexpected side effect of that was that had the opportunity to play with 2 second+ exposures in broad daylight, so Beam me up Scotty!

In terms of results, it was a little higher contrast than I expected, and very, very, sharp. That presented the first problem, that it will show up any inadequacies in your lens or technique. If there's any softness then it's NOT the film's fault!

Grain is virtually non-existent - the original scans were at 6400dpi and there was just a hint of what might have been grain or might have been scanning noise in the sky.

The blue sensitivity darkens vegetation quite a lot, and yellow flowers will come out virtually jet black, which was what I was hoping as I took that shot. Exposures were left to the camera, so were pretty well right for the conditions but the darkening of greens was such that it did need a little correction in post on some frames to avoid an overly "moody" effect given the brightness of the day. All the same, there was plenty of detail available to bring out, which suggests that the the latitude is pretty generous.

In terms of handling, it dries very flat indeed but the base is so thin that it feels a little unsafe to handle, almost like it'll crumple if you're not very careful. The base is also extremely clear.

All in all, an interesting emulsion with very distinctive characteristics which I'll definitely be shooting again - just wish it was available in medium format. 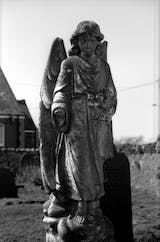 Using my trusty nikon F4 and a nikon 50mm f1.8 lens i took these images usinf f2.8 at 1/30th to allow a hand held exposure.
The film was developed in d96 for 7 min and subsequently scanned in. I love the rance of tones that this film can reproduce on a bright sunny day. No detail in the sky but there wasn't any anyway . I will come back to this film for some projects in the future 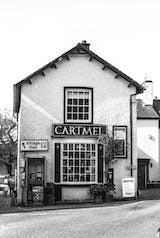 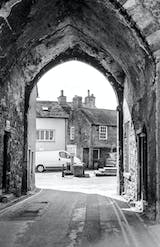 This film was a test of my long exposure chops (and of my ebay special tripod - not recommended!). It's very very punchy, and even though I stand developed, very contrasty - which I like. It definitely feels like a cinema film, and for fun I cropped a lot of my images to 1.85:1 which suits it very nicely - I think this film, requiring long exposures, lends itself well to architectural photography, light painting, and experimentation. Dried well, scanned well, and I'm going to be shooting a few more rolls to get the hang of it!

Great film, the long exposures made for some really cool effects with movement. Beware the film is a bit thin and doesn't always leave space at the end of the roll for clipping / unloading.