Delta is a modern emulsion from Ilford - created with finer grain to provide sharp black and white images with excellent contrast. While this means the 35mm film is slightly less forgiving of wide exposure latitudes, the professional results when you nail the exposure will blow you away!

To understand more about the details above you can check out our film guide or if you want some inspiration then head over to our page on choosing your next film. And if you want the full details about the film, including technical information, read about Ilford Delta over on EMULSIVE.

When you buy your camera film from us we can ship it across the UK, Europe, USA, New Zealand, Australia and Canada (more countries planned soon!) So buy your Ilford Delta Film 35mm B&W ISO 400 today and dive back into the fun of 35mm film photography!

I had been holding onto this film for an occasion with while, wanting to make the most of the added sharpness that Ilford's Delta range has. On a recent trip to the Lake District, I took this film and loaded it for the 'highlight' climb, Helvellyn. The images produced were good, but not to my perfect liking. The shooting conditions maybe weren't great, but I foyund this film to sometimes have a heavy contrast and other times not. I'd also go as far as to say that I didn't find this film overly sharp either. In a previous review, I mentioned my newfound love of Fuji Neopan 400CN which I took on that same trip, so perhaps my opinion is thrown due to the performance of that film.
Overall, I think Delta 400 is a great all-rounder and I wouldn't complain about shooting it again. My images came out ok, however, I don't think I have found a 'go to film' in Delta 400 and I think there are other B+W films I'd turn to first.

First time shooting Delta 400 and I'm impressed. The tonal range is fantastic, and though there is a visible grain, it's not displeasing. I look forward to shooting more in the future.

Sharp and fine grained for it's speed, but a little soulless. Results can look awfully like a black and white conversion of digital. Depends what you lke.... 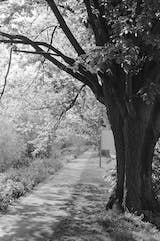 This film is great. I find all the Ilford brands I have used do not disappoint. I was pleased with the results on all the images I have taken with this and would defiantly buy again. Great all-rounder.