A wonderfully soft emulsion: delivering low contrast in all your images, this 35mm film will help you create beautiful portraits in gorgeous lighting. It is also commonly used in technical photography to reproduce images without imposing harsh contrast constraints. A gentle final look.

To understand more about the details above you can check out our film guide or if you want some inspiration then head over to our page on choosing your next film. And if you want the full details about the film, including technical information, read about Foma Retropan over on EMULSIVE.

When you buy your camera film from us we can ship it across the UK, Europe, USA, New Zealand, Australia and Canada (more countries planned soon!) So buy your Foma Retropan Film 35mm B&W ISO 320 today and dive back into the fun of 35mm film photography!

I shot a roll of Foma Repropan with my Contax 139 Quartz, and knowing from reading previous reviews that it's low contrast, I thought that, especially as it was quite a bright day, I'd use an Orange filter to both help with the light situation and to bring out the contrast a little. The results were that my negatives were quite nice....until I came to scan them! It apears that the emulsion must be quite fragile as, despite me dilligence with handling the film, most frames had some marks. I tried carefully cleaning the negatives, but the result was the same. Maybe(?) the film doesn't like being developed in HC110 B, I don't know...I've never shot it before. That said though, once I'd done a bit of work on the scans with Affinity Photo (something I'm only just starting out with) I managed to get some reasonable images.
Would I shoot it again? YES I would, but maybe try a different developer next time.

The Foma Retropan 320 is a nice film, for close ups that is. I really wouldn't recommend the film for landscapes. I found the film to sometimes be quite flat and lacking in contrast. Close up shots did however show better contrasts and tones than landscapes.

I would definitely reccomend this for some creative close up work, that soft and grainy detail works so well for that sort of thing. I found it not so great for landscape and portraits but I enjoyed shooting the spring bloom on it. 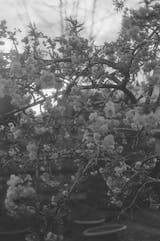 I'll start with saying that I'm a big fan of Foma. All the Fomapan films (100, 200 and 400) I've had great results from. And I'd been cautiously looking at Retropan for a while; I say 'cautiously' because I was interested in it even though it didn't sound like my kind of film. Low on contrast and can be very grainy? Nah - not for me. But I was still interested in giving it a go!

But apart from it doing what I was told it would do, I also found it inconsistent and a bit... weird. I quite liked it on some close up detail shots - the grain works nicely there. But for everything else I just can't see anything apart from the grain. For landscapes it loses everything - any subtleties are completely lost. And yet the tonality of the film (once I'd tweaked the shadows and highlights) is actually quite nice. But it seems to be different from frame to frame - and whatever a film is doing, I tend to like it to be consistent.

It looks like the film has been pushed. Which is fine - if you want a pushed grainy film then be my guest; that aesthetic can work very well. But I'm not entirely sure who this film is made for. It doesn't give a particularly 'retro' look; it's not good for landscape, and for grainy street photography I'd be more inclined to grab some Fomapan 100 and push it if I wanted more grain.

And yet I can't really mark it down too much as I do quite like the tonality. Maybe it just has a very specific purpose - as I said, I did like it on some detail shots. But I'd suggest trying it out before you do anything important with it. 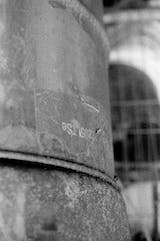 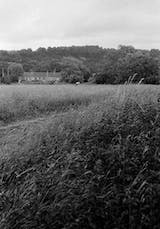 M
M.R.P.
Perfect for: Portraits, Creative/Abstract
Your mileage may vary

This is *very* soft. I've shot a couple of rolls of this now and I'm happy enough with some of the pictures, but by no means all. I really like the softness on portraits, particularly with the lens wide open.

I'm not so keen on things like finely detailed greenery. They ended up a bit of a mush, to be honest.

It's surprisingly nice for simpler shots like that though.

It's really not my favourite black and white film, but it is cheap. I'll probably buy it again, but make sure I'm using it to it's best advantage.