Lomography's Lady Grey Film is more sensitive than the Lomography Earl Grey, and can therefore flourish in slightly gloomier conditions.

To understand more about the details above you can check out our film guide or if you want some inspiration then head over to our page on choosing your next film. And if you want the full details about the film, including technical information, read about Lomography Lady Grey over on EMULSIVE.

When you buy your camera film from us we can ship it across the UK, Europe, USA, New Zealand, Australia and Canada (more countries planned soon!) So buy your Lomography Lady Grey Film 120 B&W ISO 400 today and dive back into the fun of 120 film photography!

I picked up a Balda Baldixette from eBay recently, not because I particularly wanted a 120 camera, but more because it was a beautiful piece of West German engineering. It's about 60 years old and was marketed as a point and shoot in it's day. Zone focusing, fixed shutter speed and a choice of F16 or F9 meant that I needed a forgiving film. I've had good results with Orca 110 before, so decided to try Lady Grey. There were some mishaps; the shutter action is so quiet that I ended up double exposing a couple of frames. Inexperience in handling roll film meant some slight light leaks and the limited aperture control meant that it was very much a case of hoping for the best. I developed in Caffenol and scanned using a light-box and digital camera. The results were remarkably good - fine detail and decent grain, with plenty of detail in the shadows. I've upped the contrast post-dev, but otherwise the image is untouched. I'm very pleased with the results and am looking forward to using more Lady Grey. There may be more technically advanced 120 film out there, but this is a good film for an introduction to the B&W 120 format.

With no high expectations I am very pleased with LadyGrey400's results. It's such a great film for various ocassions; especially in changing light during the day. Just load it and don't worry if it's too sunny or too cloudy. I can definitely recommend to try this one out, because I'm pretty sure you won't be disappointed. 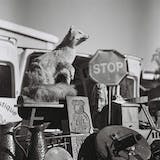 This film is everything I think I shouldn't like - high contrast, deep blacks and Lomo trademark designer grain. I arrogantly think I'm better than that somehow. And yet every roll gives me two or three images that I really love... so I keep buying more of it. Advice for others is that it's a great film, giving beautiful photographs with a unique look about them, and the grain on 120 is actually very nice. For me, I think I have some soul searching to do. 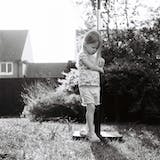