This 35mm film is a highly-technical emulsion which means it needs bright light but will reward you with very fine detail, strong contrast and high tonal sensitivity. Perfect for images where accuracy and definition are essential - scientific photography at its best!

To understand more about the details above you can check out our film guide or if you want some inspiration then head over to our page on choosing your next film. And if you want the full details about the film, including technical information, read about Rollei Ortho over on EMULSIVE.

When you buy your camera film from us we can ship it across the UK, Europe, USA, New Zealand, Australia and Canada (more countries planned soon!) So buy your Rollei Ortho Film 35mm B&W ISO 25 today and dive back into the fun of 35mm film photography!

This film works brilliantly for landscapes. Being ISO 25 a very steady hand or a tripod is needed. Pictures have excellent shadow detail, grain and sharpness is excellent. One downside is the film is very curly so can be tricky to scan.

It was quite experimental for me to test 25 iso film, with film speed This low I regretted to carry a 42-75mm zoom lens for the half of the shots...on a not very bright sunny day. Even though it required more shutter speed to get a sharper image, lower speeds turned out to be more experimental with less contrast than I expected since I have pushed 1 stop while developing

Wow, never shot ortho before and I'm knocked out by this. I can see this being a marmite film but for me, ideal. The detail in shadow areas is just superb, to the point where I will probably shoot my next roll 1/2 stop under as it seems to have a tendency to blow highlights quite easily. You will want to carry an orange filter with you if you have much sky in the shot as it is predominately blue sensitive which I should have noticed from the tech spec anyway, low red sensitivity, very low!
Sharpness and grain go without saying at 25ASA, thus you will be forced to use a tripod, so no downside :-)
This film has exactly the look I have been hoping for, I've been using Pan-f up until now and having my commercial shots printed up at least one grade harder, now that won't be needed.
A little more experimentation required but this is a film I will be buying more of. 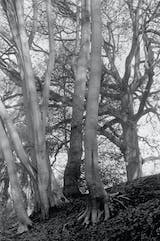 This film works brilliantly for landscapes. Being ISO 25 a very steady hand or a tripod is needed. Pictures have excellent shadow detail, grain and sharpness is excellent. One downside is the film is very curly so can be tricky to scan.