The Holga Pinhole is a cult classic film camera but without a lens! Deceptively simple to start shooting pinholes, but with a wealth of creative options.

The Holga is a 120 film camera, so shoots medium format film. You can use any of the 120 films that we list in store, but I'd recommend you begin with a film of ISO400 so that you can learn to shoot pinhole with some exposure flexibility!

The Holga Pinhole Camera comes with a strap, a lens cap, and an internal film mask so that you can choose to shoot twelve 6x6cm images or sixteen 4.5x6cm images.

If you've never shot pinhole before then this will be a treat! An original means of capturing images - from before the invention of reliable lenses - and still a wonderful way to experience analogue photography. A brilliant addition to your shooting portfolio.

If you want to learn more about getting started with analogue photography please check out our Beginner's Guide to Film.

Just ran a roll of Delta 3200 off with this camera. Certainly sets your brain going with calculating time exposures and so on...which varied on 3200/120 from around 8 seconds to over a minute. I waited with baited breath for the roll to come back from your lab. Not too bad at all really, just around the house and garden but got results. very pleased. Although tripod was used results a bit shaky! Need to sort a release out for the really long exposures. 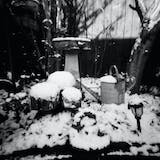 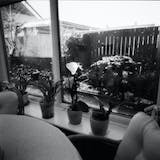 I bought this camera because I had been experimenting with a DSLR for low light/long exposures but wanted to experiment with a film camera for the same type of photography and since this camera is a pinhole camera that's all it does. Pinhole cameras were a new experience for me and so was 120 medium format film. I grew up only having access to a 35mm film camera and medium format cameras were always seen as so expensive that only professionals could afford them, then digital cameras took off in the 90's and then took over. I've seen Holga cameras described as 'toy cameras', which is true, they're plastic (including the lens), basic options or no options, inexpensive and fun/a challenge or for the photographer who wishes to replicate a certain aesthetic look in their pictures. Because it is a pinhole camera it has no lens, just a hole that means it is permanently set to f/192. It comes with 2 plastic frame size masks, 6x6cm (= 12 exposures) or 6x4.5cm (=16 exposures). For those like me, new to medium format film the frame count is on the film backing and appears upside down in the frame count window and you also need an empty film spool to wind the film on to. Multiple exposure shots are very easy to achieve, divide your exposure time by how many shots you wish to take and don't wind the film on to the next frame. As the f-stop is fixed you cannot control the focus so every shot will look flat with no focal variation. Exposure time is a problem, if you look online there is an equation to calculate the manual exposure time which is great if you can calculate fractions into seconds but personally my maths is not that strong, I ended up having to download, get printed and assemble a pinhole exposure calculator from Ilford's website, then shoot a trial-and-error test film and make notes of each shot to see which exposure time worked. The actual exposure is an issue as the shutter release is a manual switch at the front of the camera which has to be depressed for the exposure time, a minute is fine, but depending on the subject, you might need longer resulting in cramp or camera shake even when mounted on a tripod. Looking online for a Holga external shutter release + adaptor resulted in looking on eBay at scalpers wanting £232 for them, (I don't even want to start investigating how much they charge for a Holga filter adaptor). Even then you would still need to keep the shutter release button depressed. I found a way around the problem by sanding a wooden clothes peg down and squaring it off, so when I need to take a long exposure photo I keep the lens cap on, depress the shutter release, wedge the peg into the top of the shutter release to trap it down, then take the cap off carefully to minimise camera shake. When the exposure is done I just flick the peg out. Even mounting this Holga on a tripod is a problem. I use a Manfrotto 055 tripod with a 410 Junior Geared Head + 400pl Quick Release plate for all my cameras, but the tripod mounting screw hole is underneath the "lens" area and not under the base of the camera, so the camera got pulled downward when I attached it to a release plate. The solution was to use the 3/8 screw supplied with the plate and buy a 3/8 female to 1/4 male adaptor as a spacer and screw that into the Holga. My test film got some good shots but the only subject I could get was a rose in a glass vase lit by a light tent so the lighting was artificial (and controllable). The only other shot I got was a low light long exposure shot of a moving LED light to finish the roll of film, which turned out well, (developed and scanned as a Premium TIFF file by AW which is an excellent service by the way), and I've used it in a digital collage piece for a poetry illustration project I'm working on. I shall continue to experiment with this camera, I have yet to try colour 120 medium format film and I have recently purchased the 35mm-120 film adaptors and a Paterson changing bag for manually rewinding 35mm film out of a medium format camera from Analogue Wonderland. I would recommend this camera for anyone starting out with film photography and to any experienced photographer as a fun challenge. I would also recommend it is used in a well lit area where you can setup a tripod, a stationary subject and a moving subject(s) in shot, somewhere like an art gallery (with permission) or street scene. 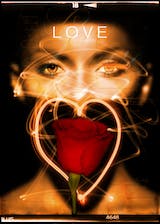 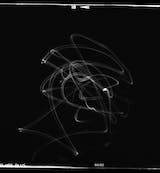 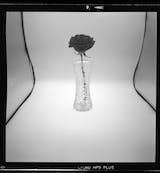